John: All right, welcome to today’s episode of Tomorrow’s Leader, where we dove deep on all things leader-related, related to leading yourself and leading others. I’m John Loredo, your host here with another story from my trip to Hawaii. I’m telling you, there’s going to be a bunch of them, all kinds of stuff came up with all kinds of podcast episodes out there. Here’s a quick one, though, for you. So I have gone to Hawaii, Maui for I think five times. I’ve been blessed with the opportunity to go there partly for work and partly for personal reasons and fun and all kinds of stuff.

John: So I went to Maui on my honeymoon way back 25 years ago. We went there and had a phenomenal time. And 25 years ago, I remember almost twenty five years ago, we had tried something called Hula pie, which first for those of you who’ve never been there, Hula pie is just like this magical morsel of goodness. It is just indescribable. It’s this big hunk of a huge pie that only is found in Hawaii and certain areas of Hawaii. And I can’t even describe it. It’s relatively simple, but it’s unbelievably delicious. It’s like macadamia nut ice cream and chocolate and toffee and graham crackers. It’s all this comedy whipped cream. It’s all this combination and you just absolutely love it.

John: And so for years, every time I went back there, I’ve been looking for this Hula pie. I could not find it. I went to Waikiki Beach. It wasn’t there. I went to other areas. And for some reason, I’m thinking this is just the best thing in the world. It has never left my mind in over 20 years. I’m thinking, OK, I’ve got to find this Hula pie, I’ve got to find it. So when I went with the kids to Maui, I’m telling them all about it. They’ve heard me talk about it for years. And I’m like, we got to find a place that is Hula pie.

John: Well, thank God we did. And we felt we were in the right area. We’re in the Haina Kaanapali area and they had multiple places that we ate at that had Hula pie and we had it. I think we had it almost every single day. And the kids agreed was unbelievable. It’s incredible. And literally, the piece is like this. It’s like a football. So it was fantastic. And what it made me think about is, how many businesses out there have something that’s that much of a lure. That’s that great, that’s that unique that people are talking about for years and years and remembering it and searching for it for years and years.

John: You know, what is it about your business that would get people talking? Do you have a hula pie? Do you have something in what you do and how you do it that sticks out that much, so much so that you would hunt for four years, that other people would crave it for years? Do you leave people in a position where there’s so much better off because you worked with them or they experience you or your company or your services that they’re

talking to other people about it? Wow, this is such a great place and they did such a great job. And here’s what they did. And oftentimes what it is, it’s not something overly complex.

John: This Hula pie was not anything, like, really difficult. I don’t think they made it just different and different is better than better. I will say that I learned that from Lisa Larter. If you’re learning. If you’re listening. Lisa, Lisa, I’ve done some great work marketing. Why is it fantastic. And Lisa told me that quote, I love it better is better than good. No different is better than better. I screwed it up anyways. But think about that. What is your Hula pie? So what is it about your organization that causes people to talk about you and think about you for years after that?

John: And I want you to just think about this listening right now. When you, what organization, what company, what product, what service, what person had such an impact on you years ago that it sticks out in your mind today? I don’t care if it was a great car wash you got or a great restaurant you ate at or was a great accountant you worked with or whatever the case was, a doctor that sticks out so much that you have told other people. So leaders and business owners, what is it about you? What is it about your business that people would talk about because you are so good, so good. And if there’s nothing you can think about, my mission, my challenge to you is to come up with something.

John: What’s your vision? What do you want people to think about and talk about and share and crave for years and years? Is it going to be how you do things or how you deliver things or how quickly are high quality or whatever it is, but something that’s unique, that’s different? Think out of the box. This is where business becomes really fun. Because you can think out of the box and some of the best ideas have been things that have been just so different and

out there, you know, I mean, think about it all the greatest ideas in these companies that have been born and grown so fast.

John: All right. So then I hope this was helpful. Quick one. The wheels turning today. I hope you’ve enjoyed this. Like, subscribe, share common, all that kind of good stuff. I love your suggestions on great guests. I’ve got my book coming out in about two months, less than two months called Tomorrow’s Leaders. So stay tuned for that. I’m going to tell you how to preorder that. Let me tell you, I think you’re going to like it. It’s lots of great stories, all the best that you’ve not heard before. And some of the stuff that I haven’t even brought to podcasts, I think you’re really going to like it. So and certainly direct messaged me. Let me know you’re interested. I’ll make sure you get a copy. Thanks, everybody. Have a good one. 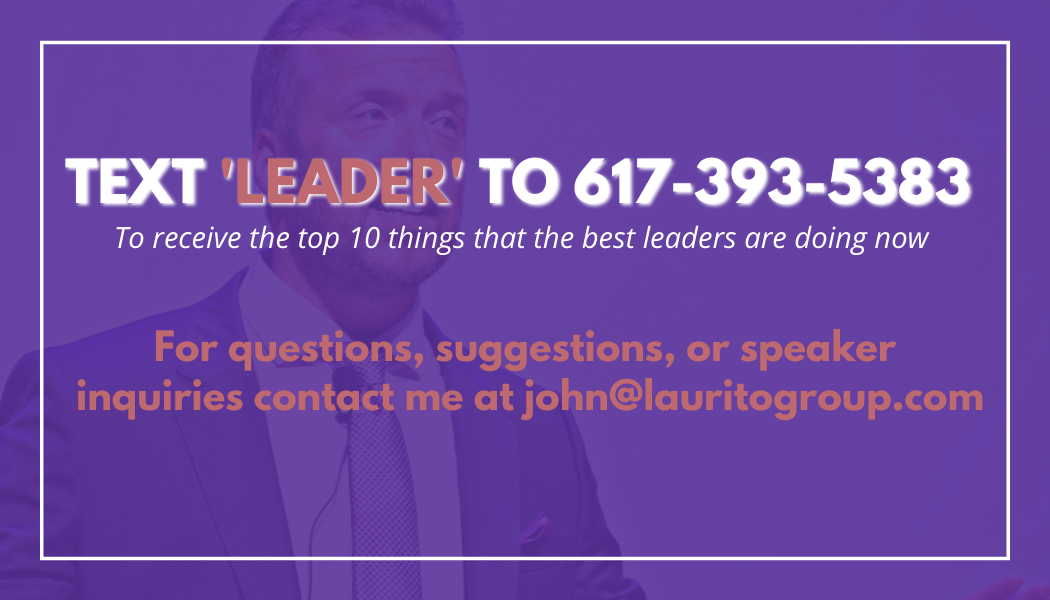