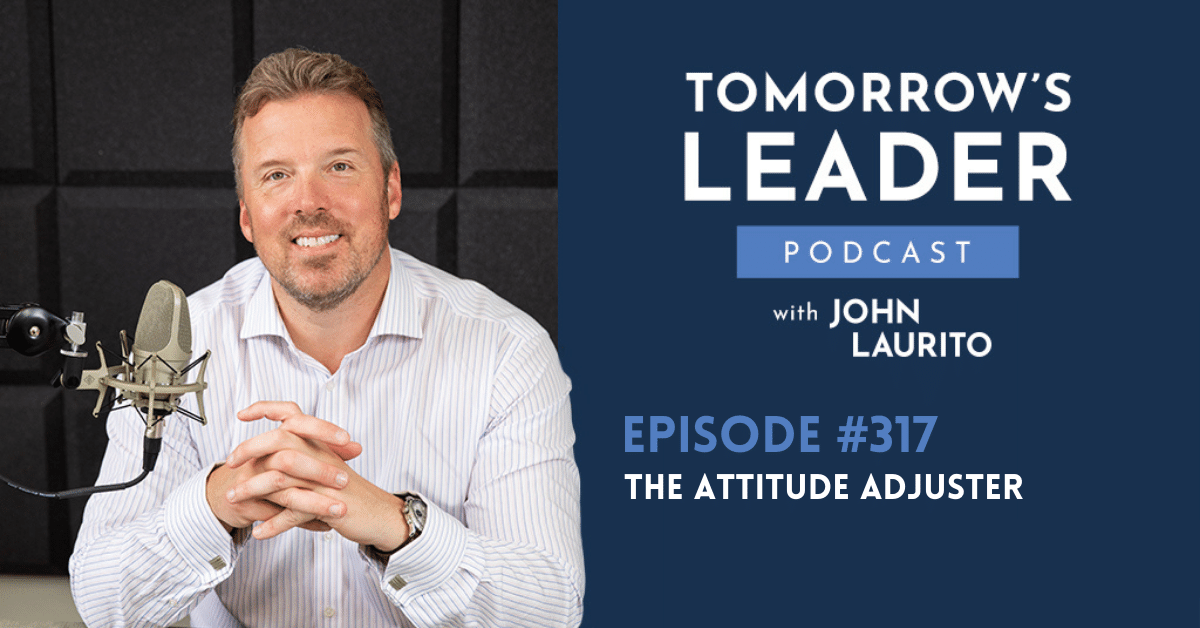 [3:38] Leadership is influencing people in a positive direction

John Over the last two decades, I’ve been on an insatiable quest to learn everything I can about leadership. What makes the best leaders so good? After running companies small and large over the last 20 years, today I speak on stages all across the world to audiences who are interested in that same question. My name is John Laurito. I’m your host, and I invite you to join me on this journey as we explore this very topic and what makes the best leader so good. Welcome to tomorrow’s leader. All right. Tomorrow’s leaders. Hope you’re doing well. It is, John. And we know you’re host with another episode for you today. This is going to be a short one. I wanted to share this story with you because I thought was kind of cool the other day. I’m on my way to the gym early morning, you know, and I’ve got my day planned and including the time frame for the gym and what time I leave and all this kind of stuff. And, you know, I just I take the same route every single day and it’s all back roads. There’s never any traffic. And so I’m actually on this road that normally has zero traffic. And all of a sudden I come up to this traffic jam and I’m like, what the like, is there an accident, construction, whatever? And I’m sitting there waiting, waiting, waiting, waiting, waiting, waiting, waiting, waiting, waiting, waiting. And it turns out goes ten, 15 minutes. I don’t know what it is. 15, 20 minutes. I’m like, what the. Yeah, I feel myself getting angry. We’re not moving. I’m like, what? I’m thinking, turn it around. How do we get out of this thing? Cars behind me lined up. It’s a one way lane and blah blah, blah, blah, blah.

John So I’m just feeling myself, you know, go into this bad place and my girl, you know, I get to get back at a certain time. I’ve got meetings and stuff, so it’s eating into my workout. I’m like, I do, I even go whatever. And finally the cars start moving and it’s construction zone. Now, you know, I get it that these guys are going to do work and whatever. And but anyways, I’m kind of in a bad mood. And as I get up nowhere near the construction, there’s a guy that’s got the stop sign and the slow sign and, you know, it’s turning it back and forth, letting the cars go through. And this guy is standing there with the sign as I’m driving by. And he could not have had a better like demeanor. And just he is talk about a guy that has jumped into his role and looked at this as an opportunity to like totally inspire people, put a smile on their face, whatever. I mean, he is out there and he’s just looking everybody right in the eye, big smile on his face, waving, pointing at them, you know, kind of dancing around a little bit. I mean, he is just full of life. It’s early in the morning and this guy is you couldn’t help but, like, make eye contact with the guy and smile back and wave back. And I’m like, I’m looking at this guy. I’m like, this guy is 100% vested. He is invested. He is absolutely committed to what he’s doing. And you know what? It’s not about holding a sign up at the side of the road. It’s not about doing construction. His job, if you ask them, it is not. I’m a construction worker.

John His job was to make everybody’s day a little bit better. I promise. I can guarantee if you ask this guy, that’s what he looked at as his job and he did. Now, I don’t know, maybe there’s just got to be a thousand cars that go by, a couple thousand cars that go by. And in a couple of hours, I don’t even know. So by the time I got back and I saw him again on my way back and he’s doing the same thing, he’s waving and, you know, smiling and dancing and stuff. The point is, I left there feeling better instantly when I passed by him the first time I went from being, like, angry and frustrated to having a smile on my face. And I’m like, and I thought about him during my work, and I’m like, this is really cool. This guy, this one guy flipped everybody’s mood instantly. I guarantee every person driving by had the same reaction. They went from this negative, you know, angry, frustrated place to a positive place. And you couldn’t help but love this guy who had this ripple effect on everybody’s day. Because I guarantee now the next the later that day, I was telling a group of people that I was talking to the story about about this guy doing doing this. I’m like, what a cool guy. So now he has me telling other people. People like to hear the story. They’re like, Yeah, that’s a cool, cool little thing. It makes their day a little bit better whenever. I’m just amazed at the power that people have, the influence that we have. Here’s a guy that woke up and I don’t know if he said, Hey, listen, my my vision is that I impact thousands of people today just a little bit.

John But he did. I guarantee he did. He impacted thousands of people a little bit, made it a little bit better that day. That’s what’s cool. And the greatest thing is that’s leadership here. A guy is a construction worker that is an influential leader and and nobody would have known it. And and all he did was just have an attitude that was infectious. It was contagious. You could not drive by him without having some of his attitude rub off on you. It was amazing. Amazing. And I just think back to that guy and I could picture his face and he was just genuinely excited to look and make eye contact with people and wave and make their day a little bit better and see a smile come back at him. I mean, he just visibly he was excited. I was like, wow, this guy is a rockstar. Ah. I love this guy. I’m intent on finding out who this guy is and finding his name because he was just like the master of the day. He just like you just won the day. Really, really cool. But it just, you know, of course, it made me think about leadership. That’s what leadership is, its influence in people in a positive direction to feel or think or do differently than they would have done otherwise to change the course of somebody’s day or their week or their month or their career or their life, whatever, to change the course. That’s leadership management is maintaining. That’s just kind of keeping things as is. Leadership is change its influence in people in a different direction, helping them do things or get somewhere that they wouldn’t have gone without their help. I would have gone to the gym was sourpuss had this guy’s interaction not affected me an impact on me, had he not been there to impact me, I would have been, you know, a little bit more, you know, sour at the gym and frustrated.

John And my day might have started off in a wrong way. Instead, it was actually a positive start to the day and it rippled through the rest of the day was really cool. So a little cool story about leadership that I didn’t realize I’d be part of seeing that experience. It was really just a cool thing. I think it was yesterday, the day before. Anyways, I thought I’d get on here. Share that story with all of you. I know you love it. Get a kick out of it. So share your stories with me. I want to hear from who’s impacted you positively. What situations were you in? Were somebody, whether you knew them or not, they changed your attitude, whether it was something big, small, deliberate, unintentional, whatever. I want to hear about it. How did you get impacted by someone else? Or better yet, how did you impact somebody? How did you make somebody’s day a little bit better or change their attitude or change the way they thought about something? Whatever. I’d love to hear your story, so reach out to me.

John All right. In the meantime, like, share, subscribe and all the good stuff going on below, give a five star review and we’ll see you next time. See you. Bye. Thanks for joining us on today’s episode of Tomorrow’s Leader. For suggestions or inquiries about having me at your next event or personal coaching, reach me at John@johnlaurito.com. Thanks, lead on!