In this episode, host John Laurito talks about the Volkswagen experiment in Sweden and how it changed people’s preference of getting to and from the train station in their daily commute. The Fun Theory tells us that novelty makes things interesting, and making something fun makes doing the task more bearable. John also shares how the same theory can be applied in people’s personal or business lives to make activities or work fun while getting maximum results.

[0:26] The Piano Stairs in Odenplan underground station of Stockholm

[4:12] Changing the behavior by adding a short-term reward and how this theory relates to leadership and business

John Over the last two decades, I’ve been on a quest to learn everything I can about leadership obsessed with what makes the best leaders so good after running companies small and large for the last 20 years. Today, I speak on stages all across the world to audiences who are interested in that same question. My name’s John Laurito and I’m your host. I invite you to join me on this journey as we explore this topic. What makes the best leaders so good? Welcome to tomorrow’s leader. All right, welcome to today’s episode of Tomorrow’s Leader, where we dove deep on all things related to leaving yourself and leading others. I’m John Laurito, your host today, yesterday, tomorrow, and every day thereafter.

John So I was reading an article that I thought was kind of cool. There is a train station in Stockholm, Sweden, called Odenplan. I don’t know if that’s pronounced correctly or Odenplan, Odenplan, Odenplan train station, if that’s my Swedish accent or not. So a little Irish, a little Swedish authorities accent. It’s a Swedish Irish Odenplan train station. Oh, maybe it’s in Scotland. It’s a Scottish train station. I don’t know. It’s one of those anyways. So I was reading this story. This was a study done by not a study, it was kind of this experiment done by Volkswagen. And they called it the fun theory and what they found in this train station.

John This is probably like every train station in the world that they had escalators and then stairs next to them. You’ve been in train stations like that or any place airports and like 80 percent or I read the statistic is, you know, 90 percent of people go on the escalator and it’s a narrow escalator. So you can actually YouTube this and you can see and it’s a really wide stairway. So you think that more people would go up the stairs, but it’s one flight of stairs and it’s not like it’s, you know, ten flights, it’s one flight. But people just naturally gravitate toward the path of least resistance. It’s like normal human behavior. I do it. You do it. We all do it. So if there’s an escalator that’ll take us up those flights of stairs, we usually will opt for that unless people are making a conscious decision that, hey, I am going to take the stairs no matter where I go, because I want more exercise or whatever.

John So Volkswagen got together and they said, hey, can we figure out how to kind of making exercise fun and try to almost, you know, dupe people, so to speak, into exercising or doing something physical by making it fun? So they decided to use these stairs in the old train station. That’s German. That’s not good. Anyway, so what they did was they took the stairs and they turned them into piano keys. They did this overnight, by the way. This was after like 11:00 at night. And they did this from like 11:00 a.m. till 5:00 in the morning. And they basically took this whole flight of stairs and they converted it into piano keys and they were working piano keys. So just like you see in the movie Big with Tom Hanks, as people would walk up these stairs, they had a full piano there and it would make this piano sound. It was really cool. So then they videotape the next day and sure enough, people came in. They’re like, wow, this looks really cool.

John Didn’t matter the age or anything like that. You had like eighty-five-year-olds, you know, men and women as well as kids that wanted to take the stairs because they wanted to see how this worked and they heard other people doing it and they’re like, wow, that looks really neat. The bottom line is the numbers like shifted. So whereas eighty percent of people were taking the escalator before now. Eighty percent of the people were taking the stairs, which was really kind of a cool concept, you know when we are trying to do stuff. So just think about this. Anything that usually we are trying to do with delayed gratification, things like getting in better health. You know you go to the gym, you’re working out, you’re running. Whatever you’re doing, you’re dieting. These are all short-term, painful things that bring long-term rewards.

John But that’s the reason why many people can’t do it because they have to go through the pain now and they’ve got to wait for the reward now. Yes, there’s, you know, the dopamine hit and stuff like that. You get from runner’s high and all that stuff that gives you, you know, a little bit of that reward right then. But for the most part, you’re going through the pain short term to get to the pleasure and the reward long term. So what they figured out is how can we change people’s behavior by adding a short-term reward, not just the long-term reward, but a short-term reward to a little bit of short-term pain.

John And this theory kind of proved that that actually can work. So what it got me thinking about is how can you take as leaders of your own life and leaders of your organizations, how can you take different key activities that are hard to do or unpleasant to do? And how can you make them fun or at least a little less painful? And there are all different types of ways to do this. You know, I started my career in sales and, you know, in financial services and we would make cold calls like, you know, calling random people off his back in the day and phone books and call random people. And you’d get like, you know, whatever it was, 20 no’s before you got a yes. That was the ratio. And so I kind of made a little game out of it. OK, instead of setting my goals for the number of appointments, my goal was the number of no’s I could get for the night. And, you know, I was working with my sister and my great close friends and Jeff and Chris and a whole bunch of people was kind of a cool environment.

John So we’d do some goofy things. You know, we throw out a word and you had to maneuver the word into the conversation somehow, like a platypus or something weird. You know, we had some fun with it, bottom line. And this was a task, you know, we’d be doing it at night till like nine o’clock at night. So it was something that was unpleasant, really unpleasant. But we needed to do it and we figured out how to make it fun or at least less painful. And it helped us do those key activities which brought the long-term rewards. And we had a lot of success. So it was really kind of a cool thing to think about all the different things you can do in your life, you know, that you want to do. And how do you figure out there’s a way to do it? And maybe, just maybe it’s brainstorming with other people.

John But how do you have a key task become a little more fun? When I was running, I remember, you know, I love those goo packets. And for those of you that that run, you know what I’m talking about. It’s like a little, you know, a sweet packet of goo that gives you energy and this and that. It was a tiny little thing. Or sometimes they have jelly beans or whatever that marathoners will have for a little boost of energy and stuff. And I would time it out. I’d say, OK, I got to do three miles and then I get a good package or whatever it is. And that was my reward. That was something that I looked forward to, as small as it was to get to that next hurdle that gave me a little immediate reward. Even though I wasn’t done with that key task, they kind of kept me going and kept me fueled, you know, to the next level.

John So just think about that. My point of today is to think about what kinds of things in your life that you’re trying to do, what types of things in your organization, behaviors that you’re trying to drive, and how can you make it fun in all organizations, take, you know, have contests and stuff like that. A lot of that is driven around results. But how about trying it to more of the activity, more of the stuff that you have to do in order to generate the results and reward that activity? I’m not saying that’s the perfect way to do it, but that’s something to think about. You know, if I’m running an organization and, hey, I’ve got to have a certain number of prospecting appointments, each of my people needs to have a certain number of prospecting appointments booked each week, set each week.

John Maybe that’s the thing that I’m tying a certain reward to, whatever the case may be, have a little fun, have some contests go, and stuff like that so that it’s not just the drudgery of doing this task. I’m really interested to hear your ideas and your feedback again. The purpose of these podcasts is just to get your wheels turning. And I love when I hear from you and you’re like, hey, you know what? This podcast made me think about this? I’ve been trying to write a book and believe me, I know how long that can take. You know, I’ve been trying to write a book I can’t get doing it. So I created this little reward system for myself. For every page that I write, I get this, you know, I get to reward myself with watching my favorite show. I get to reward myself with a cup of coffee or whatever it is.

John That would kind of be interesting. You know, write ten pages, have ten, ten cups of coffee. That’s what I would do. But my point is there are all kinds of possibilities. Don’t just think about the standard, OK, short-term pain for long-term gain. Why can’t it be short-term pain and short-term gain and long-term gain? Why can’t it be that it can and Volkswagen figure that out? So check out that video, the YouTube video of the Odenplan in Stockholm, Sweden, something. But OK, I’ll work on my Swedish accent anyway.

John As always, like subscribe, share, comment, all that kind of good stuff. Go down below, give a five-star review and I will see you next time. Thank you very much. My thanks for joining us on today’s episode of Tomorrow’s Leader for suggestions or inquiries about having me at your next event or personal coaching, reach me at John@johnlaurito.com. Once again, that’s John@johnlaurito.com. Thanks, lead on! 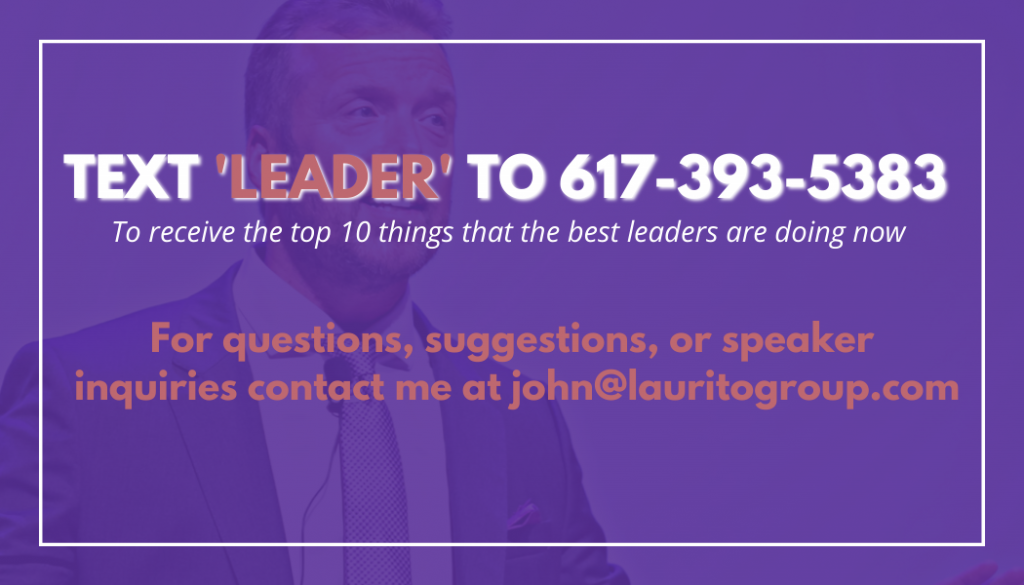