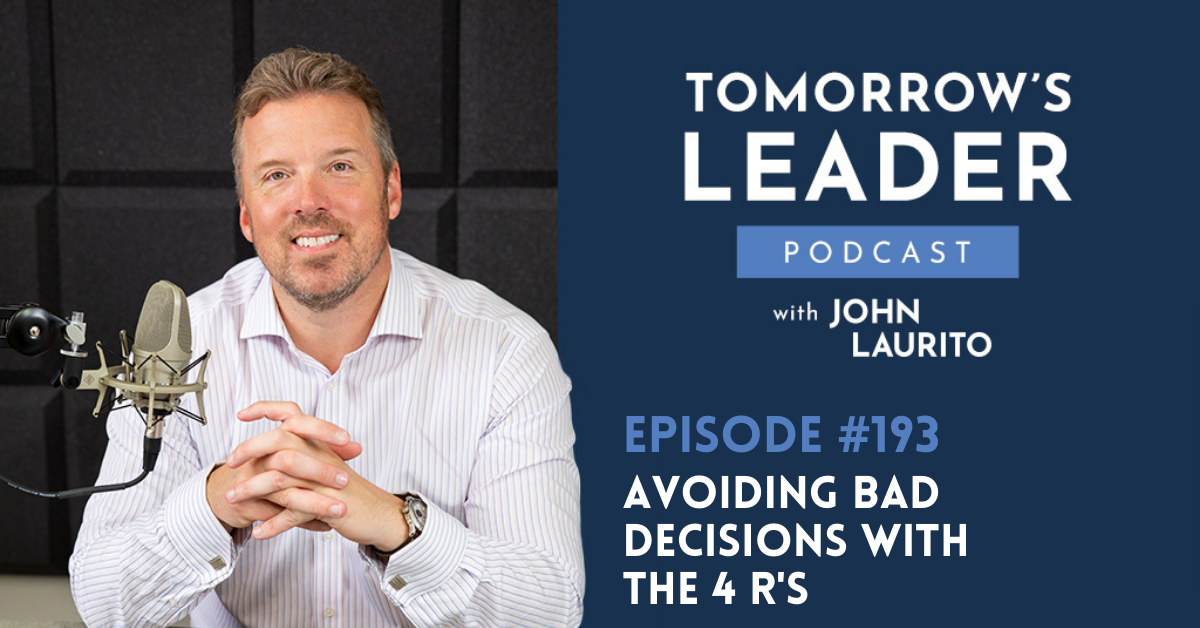 In this episode, John Laurito talks about a HUGE lesson that he encountered that impacted not only his career but also his life. After witnessing that life-changing lesson, John started to do the 4 R’s exercise every time he needed to make a decision. So if you’re constantly wondering how you can make better decisions in your career and personal life, this short episode is perfect for you.

John Over the last two decades, I’ve been on a quest to learn everything I can about leadership obsessed with what makes the best leaders so good after running companies small and large for the last 20 years. Today, I speak on stages all across the world to audiences who are interested in that same question. My name’s John Laurito and I’m your host. I invite you to join me on this journey as we explore this topic. What makes the best leaders so good? Welcome to tomorrow’s leader. All right, welcome to today’s episode of Tomorrow’s Leader, where we dove deep on all things related related to leading yourself and leading others.

John I’m Jonathan Laurito, your host today and every day for the rest of your life. So I was thinking about a story, and it’s funny because I talk to all different audiences and everything like that. So sometimes I forget that. I think I told a story and I realized, wow, this is a great one for podcast. And I went back and checked and I don’t think I ever told this story or covered this topic, which I’m now at one hundred and ninety-something episodes. I’m like, why didn’t I cover this? Should have been one of the first ones, because this is actually a lesson that I learned very early in my career.

John I’m talking about like year one or two and it’s stuck with me since then and has been one of the most impactful lessons, not just in business, but in life. So I’m going to give you a nugget. This is more than a nugget. This is a boulder. It’s more than a boulder. It’s a crater of a lesson today, crater, whatever. I don’t know. It’s going to be a it’s a big one, OK? It’s a meteor, not a crater. You know the deal. It’s a big lesson. So strap in, get ready. And here it is.

John So let me start with the story. So when I was early in my career in financial services, I was in an office. I had an office mate and my my office mate basically, I remember was came and was just crushing it. We were at the end of our first year, we kind of started right around the same time. I was barely, barely making it. He was knocking the ball off the cover. He made the conference in the first year, which was a super hard thing to do. And this was back quite a ways. So in terms of today’s dollars, he would have been making, I’m going to say a couple hundred grand somewhere in that range as a kid, pretty much out of school. I mean, it was like, wow, this kid was crushing it.

John And so any event, he was my officemates. I was learning a lot from him. I mean, just hearing him on the phone and hearing him go through stuff and everything like that. And he came in one morning. It was a Thursday morning. And he was super pumped up because he had this great appointment the night before that he had recommended a whole bunch of things for the clients they implemented. He was super stoked. He put his heart and soul into it and he made a bunch of money like it was like ten grand at that point, which today would be probably two hundred twenty grand. Two-hundred-twenty grand. Twenty-five grand, whatever it was, it was a lot of money. And I’m thinking, oh my gosh. Wow. So he’s telling me this whole story. I’m like, tell me about it. That’s great, man. So you said this and then what did they say? And blah, blah, blah.

John He’s kind of give me the play by play. Well, right. Then the phone rings, he answers the phone, and I could tell immediately by his reaction that it was not a good phone call. And I’m just obviously hearing just one end of the call, but it was probably a four minute phone call. And he hung up and I said, what’s the matter, man? Everything OK? He said, nope. That was the client from last night. They gave it some thought after I left. And they don’t want to do anything. They want to undo everything that we did last night. I said, oh, man, I’m so sorry. I mean, just I know, believe me, I had had that happen before. So it’s painful. And he said he said, I’m just I’m out of here. I’m like, yeah, man. I mean, just yeah, go whatever. Take a drive somewhere, go grab some lunch or take the day off, whatever. I mean, clear your head.

John He’s like, no, I’ve had it, I’m out of here. I said, What are you talking about? You’re out of here? And he said I’m done. I’ve had enough. I am just done. I’m like, what are you talking about? Like, as in dun dun as in quitting. He said, Yeah, I’m done. I’m not taking this anymore. I am out of here. And I’m like, you got to be kidding me. Well, sure enough, he got up, went down to the boss’s office, and resigned. Came back, packed up his stuff, and that was it. That was his last day. Now, I will tell you this, I don’t know. And he might have gone on to wild amounts of success, but I will pretty much guarantee there’s not a day that goes by that he does not regret that decision.

John I mean, if you just extrapolate it out, if he was just mildly successful and had average growth rates for the rest of his career, he’d be earning one and a half to two million dollars a year right now, running a huge practice that he would have just stumbled into it. He got that good of a start. He had the talent. He had the ability. What he did not have was the emotional competence. And I literally felt like the client would have been mortified to know that that’s what caused this person to just totally end his career. But that type of stuff happens. And so it taught me a really valuable lesson at that time about how that temporary emotional state can lead people to make horrific decisions that they ultimately regret. And there’s a four-part process, a rule that I learned that I followed that is exceptional for just helping avoid this kind of situation because we’ve all been there. We’ve all done that. We’ve all made decisions, maybe not like this, but we’ve made decisions were like, oh, what did I do?

John You know, sent an email. I said something to somebody. Whatever was it was the heat of the moment. Emotions got the better of me. I made a bad decision and ultimately I can’t undo it or if it’s hard to undo. So here’s just a really cool exercise. Easy. And if you’re driving, don’t do this. But if you’re not, write this down. This is what I call the four R’s. It’s super easy and it just helps you. It won’t help you avoid every bad decision, but it will help you at least hit the pause button and think through this.

John OK, so first of all, the first answer is to recognize meaning, recognize what it is that I am thinking and feeling right now. What emotions am I feeling? Frustrated. I’m angry. I’m depressed, I’m sad, whatever. And what am I thinking? What’s going through my head? This is not worth it. I don’t want to put up with this again, blah, blah, blah, and just recognize what those thoughts and emotions are potentially leading you to do.

John If it’s not, then it’s time for the third R, which reframe. And reframe means I need to change my thinking. I’ve talked in previous podcasts about how to reframe negative self-talk and that you go back and listen to that podcast because it’s all about how to do that, using what’s called the dispute, which is factual information that contradicts what I’m saying or reframing it from another person’s perspective, which is just changing the outlook and looking at it from a different angle, different person’s perspective and changing your self talk. In this case, this individual might have just simply said, listen, this one client does not dictate my success in the future or my happiness. I may have a better client come in tomorrow or the next day. And all of a sudden I don’t even remember that whole case then. Is it really worth it? Am I going to get myself further ahead or is it going to be a setback that I’m going to regret? Because I pull the plug and I leave? Bottom line, that’s a third R is reframe my thinking, OK, reframe my thinking.

John OK, so I hope that helps. A little story puts some legitimacy to it because it did stick with me for my entire career and I have used that. And believe me, it has helped me make much better decisions and avoid some of those really bad ones. So I hope you find this helpful. Let me know. Let me know your thoughts. Give me some feedback, some comments, as well as suggestions on future topics and future guests.

John As always, share, like, subscribe, all that kind of good stuff and go down below. Give five-star reviews. Greatly appreciate your time today. Have a good one. Thanks for joining us on today’s episode of Tomorrow’s Leader for suggestions or inquiries about having me at your next event or personal coaching, reach me at John@johnlaurito.com Once again, that’s John@johnlaurito.com. Thanks, lead on!