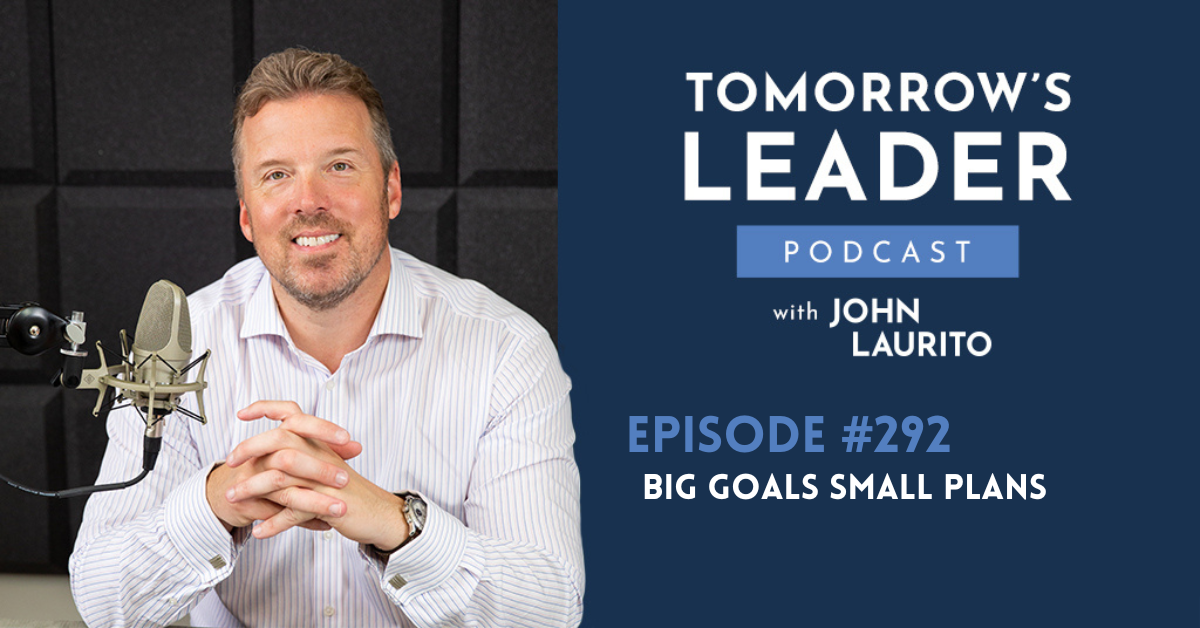 We all want to set big goals; who doesn’t? But we don’t realize that huge goals also need a bottom-up plan to achieve them. Today host John Laurito talks about why Big Hairy Audacious Goals require bigger plans to assure their achievement. Show notes:

John Over the last two decades, I’ve been on an insatiable quest to learn everything I can about leadership. What makes the best leaders so good? After running companies small and large over the last 20 years, today I speak on stages all across the world to audiences who are interested in that same question. My name is John Laurito. I’m your host, and I invite you to join me on this journey as we explore this very topic and what makes the best leader so good. Welcome to tomorrow’s leader. All right.

John Welcome to today’s episode of Tomorrow’s Leader, where we dove deep into all things leader related to leading yourself and leading others. I’m Jonathan Rieder, your host. Hope you all had a fantastic 4th of July weekend. I haven’t entered the 4th of July weekend because, uh, I’m recording it on Friday afternoon, July 1st. So I’m about to embark on a 4th of July weekend. And you’re listening to this. Having already experienced that, it’s kind of like we jumped time kind of crazy. So I hope you did have a great one. I’m going to make a prediction and say I’m going to have a really great one. I’m going to spend some time with some friends at the lake, at their lake house and some family and just have a great time. So I’m very, very excited.

John But I wanted to quickly shoot off an idea that was brought to you by one of your listeners, one of my listeners, and one of your audience members. I don’t know what you call them, but whatever. A good friend of mine, an old friend of mine, a fraternity brother of mine, Steve and Steve Craggs. Thank you for the idea. Wags sounded like Christopher Walken there. Give me a great idea for a podcast. And this is just such a good topic. I’m like, you know what? He shared it with me. I said You know what, buddy? I’m going to bring that to the audience because I, believe in it and I agree 100%. He said this is something he tells his son all the time and that you can’t have big goals and small plans. I love that.

John Simple and so true. So true. So true. So and I see this all the time. I mean, I know you do, too, probably. But, you know, I work with leaders, I work with companies, I work with individuals and just myself. Over time, there have been times when I’m a big goal guy. I mean, I’m a big believer in setting big goals. I’ve always been like that bags, big, hairy, audacious goals, whatever your hairiest goals, whatever you want to call them. And at the same point, there’s a difference between a dreamer, which in my mind is somebody that has big, lofty goals but either has a lack of understanding of what it’s going to take to reach those goals or a lack of willingness to do what it takes to reach those goals.

John In which case, yeah, that’s a dreamer. But somebody who’s committed to achieving goals has also got to understand what it’s really going to take to reach them. You just can’t send out a goal and think about it and hope that it’s going to happen and it’s going to come to you. You have to do the things that are actually going to get you there. It’s like setting your goal to run a marathon 26 miles and your plan or your action is to run a mile a week and you’re going to do that for six months and somehow hope you’re going to be prepared. Well, it doesn’t matter. You could do that for a year. You could do that for two years. If you run a mile a week, you will just not build up the stamina and the strength to run a marathon. It doesn’t matter how long you do that preparation, the plan is wrong.

John That’s too small of a plan. If your goal is to run aa5k, maybe that can work. So you’ve got to think about doing the action steps is what I’m doing actually going to get me to the goal, the goals that I have now. I’m a big believer and you’ve got to look at the numbers and I’ve talked about this before, the vital statistics, which in any business you can use this in, it comes down to three numbers. Its number of selling opportunities, and closing ratio. So of those selling opportunities, how many results in a sale? And then when a sale is made, what’s the average sale size? And if you multiply those all together over a period of time, that’s going to be the revenue produced over that period of time. So if I thought and said, okay, I’m a small business, my goal is to do $1,000,000 in revenue this year. And I know my sales size is $5,000.

John I mean, truly, what do I need to do to pitch eight times? What kind of lead generation and prospecting do I need to do? How many appointments I need to set, whatever that activity, social media that I need to do, whatever that a. That’s going to generate that, then that’s going to filter in and reverse engineer those numbers. So. But the bottom line is if I’m doing one or two proposals a week, but my goal is a million in revenue. Well, the numbers tell me I’m just not going to make it. And unless I’m making massive, drastic changes, I can’t expect that I’m going to hit that goal. Otherwise, I’m just going to leave myself disappointed. I see leaders do this not only with themselves but also with their teams. They allow their teams to set goals.

John They really are not backed by concrete, clear action steps that really will get them there. In numbers of the numbers, good numbers don’t lie. So if you’re using numbers in tracking numbers, which you need to be, I don’t know, a successful CEO that doesn’t successful leader that doesn’t the numbers will tell the story of what you have to do, but it’s got to be massive action. What I think about is if my goal is really, really big, I’ve got to have an action that is just so massive that I, I fall into that goal. In other words, I have to assume that some of the things, if not a lot of the things that I’m doing are just not going to work. They’re not going to get me there. That’s fine. But because I’m doing so much, there’s so many so much action that is going to result in positive progress that I’m going to hit my goals.

John If you take massive action, I mean, massive action, it’s almost inevitable you will hit your goals. It’s just a matter of how committed you are to that plan that you put into place. So, Steve, great concept, short episode, but such a powerful message. Big goals need big plans, massive plans, massive action, big goals, and small plans do not go together. It just does not work. So my friend, my brother, thank you for sharing that. Thank you for making my day better with that idea, as well as for me allowing you to spread that and share that with the group. Again, we’re now in 90 countries. I love that. I’m excited. We got listeners all over the place. So as you know, I love short little messages that help you leave your day and get the wheels turning and thinking through things a little bit. Take this and do something with it. Maybe it’s working with one of your team members.

John Maybe it’s working with one of your division heads making it. Maybe it’s working with your whole team and saying, Hey, what are we actually, what is our action? Is our plan, our game plan sufficient to truly do what’s needed to hit these goals? Are we really if we do this, are we going to hit our goals, and are we doing it? Are we actually doing what we’re committing to do? Okay. But the bottom line is big plans deserve big goals. Massive, massive action.

John So thanks for joining everybody. Hope you are doing great again. I hope you’re coming off a great weekend and enjoying that weekend. I will have more good stuff coming up. I got a long list of episodes to do, lots of topics that you’ve all suggested, and keep them coming because again, I get my best ideas from you. So as always, like share, subscribe, go down below, give a five-star review and we’ll see you next time. Thanks.