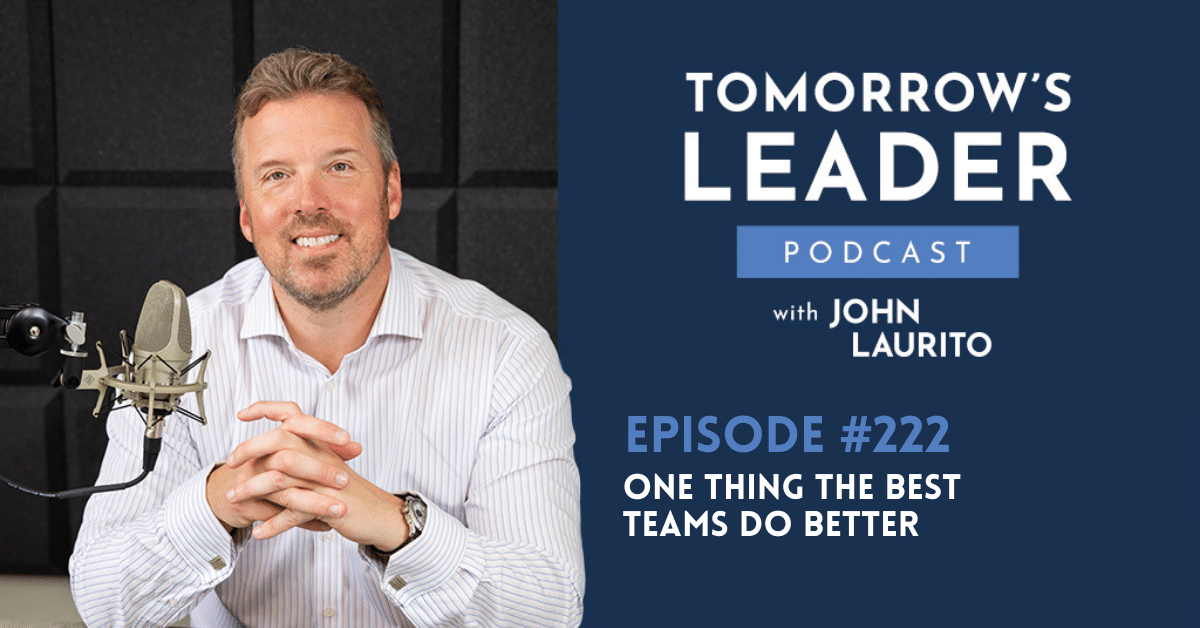 222 – One Thing The Best Teams Do Better

In today’s episode, host John Laurito talks about one thing that the best teams do better and have in common: camaraderie. Just like in any kind of group, may it be family, friends, or colleagues, having the best camaraderie within your circle is essential because it allows you to support each other and push each other to do better despite the differences. And what kind of leader would not want to have that in his team?

[3:54] The importance of supporting each other within a team

John Over the last two decades, I’ve been on a quest to learn everything I can about leadership. Obsessed with what makes the best leaders so good after running companies small and large for the last 20 years. Today I speak on stages all across the world to audiences who are interested in that same question. My name’s John Laurito, and I’m your host. I invite you to join me on this journey as we explore this topic. What makes the best leader so good? Welcome to tomorrow’s leader!

John All right. Welcome to today’s episode of Tomorrow’s Leader, where we dive deep on all things leader-related, related to leading yourself, and leading others. I’m John Laurito, your host today, yesterday, tomorrow, and every day.

John So I remember a story came to mind based on a conversation I had earlier today, which I’ll share with you that as well. And I remember this back in college. This goes back. A long time ago, my good buddy Kevin Foley and I were rooming together in our freshman year of college. Kevin, if you’re out there many, many great times I remember, and just sometimes I love reliving them. But this was one. I remember a time where Kevin went away on a weekend trip to another to visit a friend in another college. And you know, we’re in college freshman year college in a year at this point, high school/college, where sometimes you have just this banter with friends, which you’re kind of, you know, you like to have fun and kind of rib each other and poke at each other. And just it’s all in great fun and you love everybody. And it’s just it’s kind of a fun way to interact.

John So Kevin and I were at that time where that was kind of what our, you know, everybody’s relationship was at that point, this was kind of just the way you interacted with people. But I remember him coming back. He went away on a trip and I remember him coming back and he said, You know what? It was kind of the weirdest thing, he said, You know, I got there and I kind of did my normal thing where it was kind of playfully poking fun at somebody about something. And I remember he said, this was a totally new group. I didn’t know this group, but they didn’t react the way that we do. They actually kind of got their back up a little bit and they didn’t laugh. They actually came in defense of that other person, even though I was just kidding around and I really, truly was. They kind of took it personally and they immediately came to that person’s defense. They kind of made a very clear statement that that just wasn’t the way they interact.

John And he said, for the rest of the weekend, it was just this group of people that just all spoke greatly about each other. He said they all truly held each other in high regard. They loved each other. They said nothing but positive things. They were supportive of each other. They basically had each other’s back no matter what. And it was clear that to be in that group, that’s how you interacted. And he said, I clearly felt out of place because I came in with a whole different way of building a relationship. And that’s not Kevin’s fault. I did the same thing. We all did the same thing that was kind of back in Jersey. That was the jersey thing and it just was fun. But I remember I never forgot that, and I’m like, Wow, I just had this vision of this group of people that were all about helping each other and supporting each other and pumping each other up instead of tearing each other down.

John It was giving each other compliments and it was saying really positive stuff. And I’m like, Wow, that is awesome. And they were, you know, they were our age. They just had a different mentality on what it meant to be part of a group and what they wanted in a group and how they had fun together and how they lived life together. And I just remember that never left my mind for years and years. I’m like, That’s pretty amazing. And I think a lot of times, you know, we forget how important that is as we’re building organizations.

John I was reminded of that this morning. I was talking to a good friend of mine, Rob Bowley, who is an extremely successful leader running a part of Prudential out in Texas. And he was sharing with me a story about how he took over this organization earlier this year, and he’s made a huge impact, and he’s built a great team and they’re making all kinds of amazing things happen and growing at incredible rates. And he said, what’s really kind of neat is he said, we do this VIP type of meeting for new potential recruits where we have all of our leaders kind of take a different piece of our value proposition and explain it and kind of go through things in a group setting, he said. So it’s one leader presenting and then the next leader. And he said it almost happened by accident.

John When the leader does their presentation, at the end of it, the bio, and the picture of the next speaker comes up. So what they started to do is that speak that person would then introduce the other person. And he said, what’s really cool is they just started saying all this positive stuff and really pumping up their colleague that was going to speak next. And it was this unintended, incredible thing because they all started doing it. And he said the whole dynamic there was that this is a team that’s really top-notch and they’ve all got, you know, each other. And this was my perspective is he’s telling me this, I’m like, That’s an incredible team. If I were sitting through this, I’d be like, This is a team I want to be a part of, right?

John This is a team of people that truly love each other. They respect each other. They have each other’s backs. They’re not trying to tear each other down. There’s no negative competition. And, you know, backstabbing. There’s trust, there’s authenticity, there’s transparency. There’s just this element of this team that’s so wired, tight, and glued together that I want to be a part of this. I want to have in. I want to get in on this team. And as I was talking to Rob, I’m like, That is beautiful.

John You’ve got to address that. There shouldn’t be situations where other leaders or other people in the team are tearing each other down. And worse yet, doing it behind each other’s backs. That’s one of the first signs of a totally dysfunctional team. It’s got to be, again, doesn’t matter if everybody’s disagreeing or on a different page, that’s OK. Conflict is good and it’s healthy and you need that. In fact, if you don’t have that, that’s the sign of a bad team, too. But healthy, healthy conflict means that when the dust settles in that that discussion disagreement argument is done. You still have each other’s backs because you realize this is a team that’s sticking together despite the fact of momentary disagreements. This is a team that’s got a long journey ahead of it, and everybody needs to have each other’s back and stick together. So I thought that was interesting. I want to give some kudos to my friend Rob, and also just made me remember that story way back when with Kevin. But wow, what a great thing.

John So think about your communities. You know, think about your friend circle. Think about your family. Is everybody talking about each other and saying stuff? I always know if I’m talking to somebody and they’re telling me negative stuff about somebody else. I know, especially if they’re doing it consistently. I know that they’re talking about me. It’s not like I’m the only one that they don’t talk negatively about. They’re just people that are wired that way where they just all they can do is pick out the negative stuff of other people and they just talk about it nonstop. I don’t know about you, but that’s just I feel dirty. I really do. I feel dirty when I hear that and I’m part of that, you know, and that’s just something to be aware of is choose who you’re going to surround yourself with. And I just naturally assume if that person is the type that’s just talking nonstop about other people, I just have to assume that I’m part of a conversation like that that I don’t know about that. My name is being thrown around in that way because this person probably is not overly selective with who they’re talking bad about.

John So in any event, again, that’s one of those things that great teams do better than others. They just have that type of sense of camaraderie, unity, teamwork that keeps them together. And that’s the type of team, trust me, that’s the type of team people want to be a part of. So I hope this was helpful in any event. Enjoy your weekend. Enjoy your day. I hope you’re doing something that fulfills you, that makes you happy, and spending time with the people that you love and that make you better and that you make better.

John For now, thanks for joining. As always, share, subscribe, like, give me ideas on things that are keeping you up at night or things that you want to just do better at. I love to find great guests who can share some stories as well. So if you know great guests, be sure to let me know. Go down below, give a five-star review, and we’ll see you next time. Thanks, everybody. 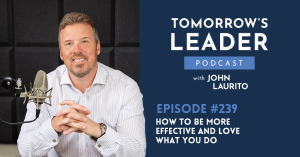 Are you happy with what you do? Do you find fulfillment and enjoyment? In this episode, host John Laurito shares a great exercise to help 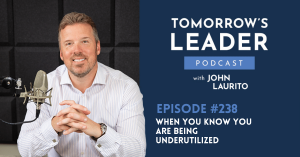 238 – What To Do When You Are Being Underutilized
John Laurito

Most of the time, John Laurito talks to leaders in this podcast, but today is different. He reaches out to both leaders and team members 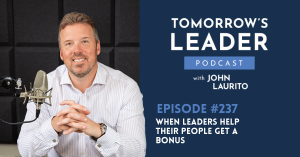 237 – When Leaders Help Their People Get A Bonus
John Laurito

In today’s episode, host John Laurito shares another leadership lesson in the form of a story about the Tampa Bay Buccaneers that showed their teamwork