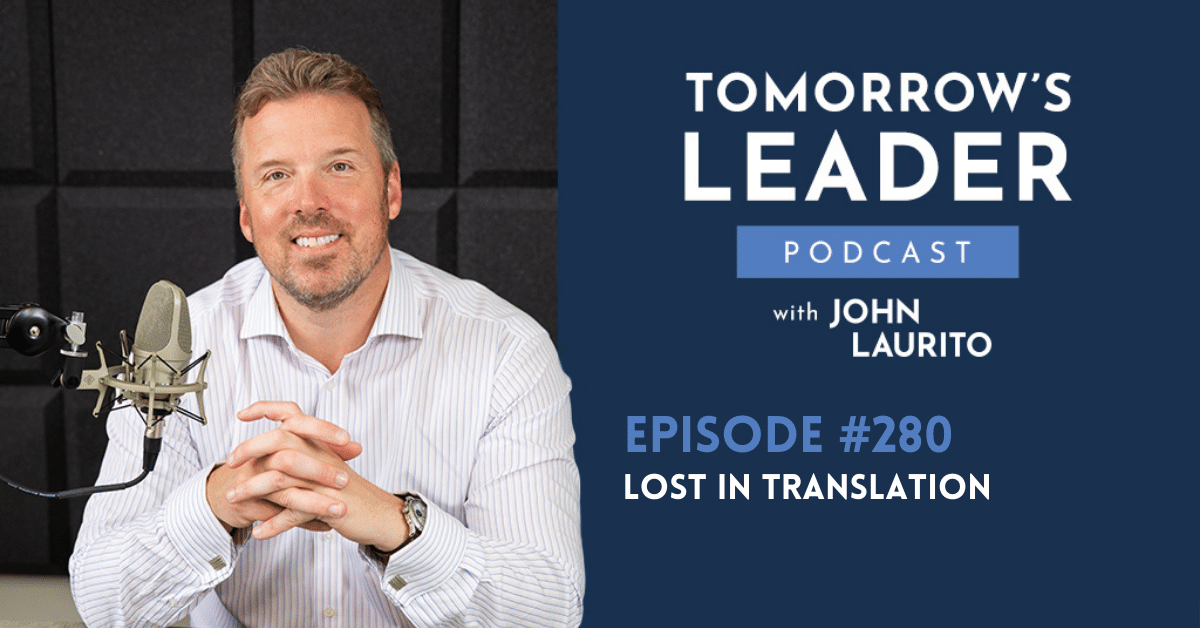 Good communication is an essential skill in any environment with human interactions. Today, host John Laurito talks about the power of good communication, voicing your opinion, and being on the same page with someone you’re talking to. This episode is a continuation of episode #277 – You Gotta “Ask For the Order” and is a topic given by a loyal listener, Belinda.

[2:48] The power of better communication

John: Welcome to today’s episode of Tomorrow’s Leader, where we dive deep into all things a leader-related, related to leading yourself and leading others. I’m John Laurito, your host. Good to see you again today. Good to hear you. You know what? I wish that podcasting could be a two-way type of communication. It wasn’t just me talking and looking at a camera, but it was us live or something. Maybe I’ll figure out how to do that. Have a live audience. I did that one time. It was a small studio audience, but I mean, like, you know, interactive, where I could actually have you, you know, somehow, I don’t know, plugged in. Maybe maybe I will do a live podcast. Maybe that’s the way to do it. Maybe I could do it on Facebook or something. So anyway, somebody wants to help me with that. Some ideas on that, that’d be kind of cool. Maybe I’ll do a live podcast episode. Hmm. Okay. Well, that somewhat has something to do with our topic today.

John: So as always, I appreciate everybody’s feedback. I’ve gotten some great suggestions. I did an episode a few weeks ago and it was called, and it was called “You Got to Ask for the Order”. And it was all about making sure that you communicate and that you truly are directive is clear and candid with what you want and ask for what you want. And the message was to leaders, tell people, what do you want? What is leadership? Call to action? And I used an example of a story. It was I had some problems, potential problems with termites. And I had somebody over my place. And you can go back to the episode and listen to the whole story. But he didn’t ask for the order. He didn’t basically let it hang there at the end. And because of that, I didn’t take action on it. I was willing and able and ready to.

John: But he didn’t ask for the order. He gave me an easy out. I took advantage of it. And bottom line, I still have not solved my problem. So I got an email from one of my faithful listeners. Belinda. Belinda Triplett. Thank you, Belinda, for being such a great listener and offering such great suggestions and for the feedback Belinda gave us. She said You know what? This is such a good point. She said You know what? Nobody well, nobody won. You didn’t win. And he didn’t win. Yeah, the sale was not made and you didn’t get a solution to your problem. And part of this has to be the recognition that communication goes both ways. There is a two-way street to that. And Belinda, you were so right with that and I love that concept so much. I wanted to do an episode on that. So here’s the thing.

John: So much gets lost in translation, right? I mean, we assume that people are masters at reading our body language, our nonverbal cues are mind. I mean, think about how many relationships have communication problems because both people are not good at communicating. And it’s not just one you can’t have. So think about a relationship in which case one person was great at communicating and the other was not. That doesn’t work. I don’t know many relationships that work that way. Both have to be really great at

communicating. Now, the one person, what I would say is the salesperson in that situation or the leader in this situation.

John: In a business situation, the salesperson oftentimes is driving that communication. Right? They’re presenting something. And great salespeople, the best ones I know are asking, asking, asking, asking, asking lots of questions. And they do that because it draws in that buyer. They get the thoughts, the feelings, the emotions, everything from. They understand a little bit better what that potential client is looking for and it can address their needs, and that’s how they bring about better communication. But here I was in a bind situation and I could have very easily voiced my thoughts and said, know, hey, listen, I’m really ready to move forward on this.

John: Now, granted, you shouldn’t as a salesperson relies on that because most people aren’t going to do that. But I could have been more direct and candid and vocal and said, Hey, you know what? Here’s really I need this taken care of. I need it taken care of. Now, I don’t have time to think about it. I’m going out of town, this and that. So let’s get this started. Here I am now. I think this was six weeks ago, and I still have not taken any action. Some still looking for somebody to solve my problem.

John: So, you know, to Belinda’s point, I’m no better off. And it was because of this lack of communication back to that whole lost in translation concept. I see so many businesses struggle with this and I still do. You know, emails are such a tough way and texts are such a tough way to communicate when you cannot see somebody’s facial expression or hear the tone in their voice. I know every single person listening to this right now is is is either guilty of this or mis-assessing. What somebody meant and their intention of a message, or maybe the other way around. They delivered a message that was misinterpreted because of the way they worded a text or an email. It’s just in reality. Yes, it’s made our lives easier because it’s allowed easier communication, lower kind of barrier of entry, and off to pick up a phone or get on a zoom. But it’s 11:00 at night, I can send somebody an email and not worry about it.

John: But at the same point, it’s made it so difficult to communicate as effectively as if we were face to face. Right. We misinterpret things. And I’ve seen business decisions get made. I’ve seen people make drastic, career-changing decisions based on an email that they misinterpreted. Truly, I had somebody, somebody, somebody a somebody that I knew in business responded to an email in an incredibly harsh way over the top harsh way because he misinterpreted the email that was sent to him, literally. So this was part emotional competency and stupidity on his part, but he misinterpreted an email instead of picking up the phone and saying, Wait a sec, let’s talk about this. What did you say? He took it and responded and fired back at multiple people and it ultimately cost him his career. Not right that moment, but shortly after that job was no longer his job. And people do things like that many, many more times than you would ever think.

John: So the bottom line is the key is you have it’s got to be two-way communications. Don’t rely on the email, don’t rely on the text. Don’t assume that people understand what you’re saying and ask. Sometimes a great question a leader can ask is just simply, Hey, just let’s make sure we’re on the same page. What’s your understanding of what the next step is here, or what’s your understanding of what we just talked about here? Let’s just go through it and make sure we’re both on the same page. I told a story a long time ago that I remember

my I got out of a meeting. I remember one time and I debriefed with somebody and it was with somebody that had it was my operations director at the time, Debbie. And this person that I had just met with her. So she got to take from that individual and she got the take from me.

John: So we were both in the same meeting. Debbie was not, but what she heard were two totally different versions. She said What do you think of when I said, Well, I think it went pretty well. She’s like, really? So what was what do you think came out of that meeting? What I thought came out of the meeting was entirely different than this other person. Now, one of us was way off and both of us were way off because we both left that meeting, assuming thinking that the other person was communicating something that they may not have, what we should have done at the end and said, okay, let’s be clear. And if there’s a question on this, just hey, let’s be clear. Okay, what’s our next step? What do we agree upon?

John: Okay, let’s recap real quick what we just discussed. What are our two or three takeaways here? Let’s just make sure we’re on the same page, whatever anything does. Kind of closeout that meeting. I learned the importance of that the hard way, but that’s important. Just making sure that you’re on the same page. Hey, are we taking from this the same message? Is this what we’re identified? Let’s make sure we’re clear on what the problem is. Is the problem this? Yes. Great. Okay. And are we agreeing on this as a solution? And this is the next step. Don’t assume that everybody’s on the same page.

John: Don’t assume that people are reading your mind. If you don’t like something, say it. If you like something, say it. If you’ve got a better idea, say it. If you’re concerned about that idea, say it. Voice your opinion. Okay, two-way communication is absolutely key. Belinda, thanks again for the idea. I love it. Great stuff. Short but I think an effective podcast episode in this will call maybe. Well, I think we already named this lost in translation. This could also be part two of asking for the order. So in any event, I hope you enjoyed this as always. Like, share, subscribe, keep those ideas coming please, and go down below. Give a five-star review and we’ll see you next time. Thanks, everybody.