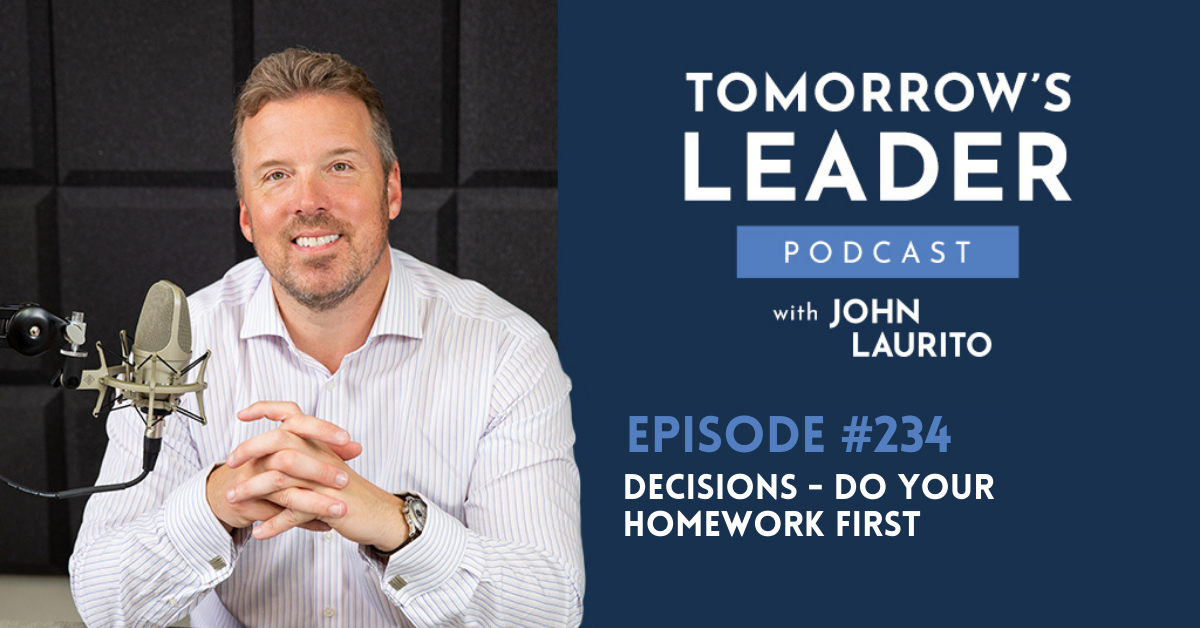 As a leader, part of your role is to make decisions, and more often than not, these decisions are enormous. So how do you make sure you’re making the right ones? In today’s episode, host John Laurito talks about how leaders can make sure their decisions are sound.

[7:14] As a leader, be careful with making the decisions solely based on feedback or people’s opinion

John Over the last two decades, I’ve been on a quest to learn everything I can about leadership obsessed with what makes the best leaders so good after running companies small and large for the last 20 years. Today I speak on stages all across the world to audiences who are interested in that same question. My name’s John Laurito and I’m your host. I invite you to join me on this journey as we explore this topic. What makes the best leaders so good? Welcome to tomorrow’s leader!

John All right, welcome to today’s episode of Tomorrow’s Leader, where we dove deep on all things leader related related to leading yourself and leading others. I’m John and we do your host. Thank you for joining the show today. I got to tell you, I just popped up to my daughter’s room and I stole two Tootsie Rolls, I forgot how damn good Tootsie Rolls are wholly Jesus. Those things are fantastic, they’re too small, though I need bigger ones, but. Well, if you haven’t had a Tootsie Roll recently, just go find one. Have it. It’s magical, magically delicious.

John So and the other thing that was really cool. So I got my daughter for Christmas a a sun or sun set lamp, which wow, she was like, you got to come up and see this she said. I popped in her room. It was like a sunset was coming through her window, it was unreal. Very, very cool. And as you know, environment is important to you. So figure out how is important, so figure out how to create the environment that’s conducive for you to be happy and productive and relaxed and just put it together.

John You know, I’m working on my office right now and putting up making a whole bunch of changes. You’re going to see a different background in this podcast. Moving forward, hopefully after this weekend and some cool stuff come in. But you know, we’re all in charge of our own environment, so create the environment that makes you happy. If it’s a big bowl of Tootsie Rolls next to you great. If it’s a sunset lamp, great. Whatever it is, figure it out, do it. Music, all that kind of stuff.

John So in 2014, there was a there’s a state owned railway system in France called SNCF. And people had noticed strangely that the platforms they thought in France, the train platforms were getting smaller, weird, like noticeably but not like crazy. But they just started noticing when it’s like, is this really getting smaller or not? And so and and people were kind of scratching their head on this debating whether or not it was the case the the French newspaper Le Canard de Jong bla bla bla. I don’t know. I’m sorry, I’m mispronouncing. I can’t read my own handwriting.

John Le Canard, achance I saw it last cannot as chance notice this thing and called up the SNCF and said, Are your platforms actually getting smaller? I mean, many, many people have noticed this. They pretty much dodged the answer and dodged the question. Didn’t give an answer. And this paper did a bunch of research, and they found out that yes, they were making the platform smaller. But there was a really good reason for it. A very interesting reason for it. See, earlier that year, the SNCF state owned railway system in France had spent 20 billion dollars on revamping their entire fleet of trains.

John They bought 2000 new trains, and it was part of this major overhaul of their transportation system 20 billion, not million, $20 billion on 2000 trains. Some of the math real quick 20 is that to. That 10 million dollars per train, I can’t recall, but anyways, so bottom line is what they found is that they had measured a small portion of the platforms prior to placing this huge order. But what they didn’t do was measure all the platforms. They didn’t do all the legwork and research that they needed to. And what happened was these trains that they had built that they spent $20 billion on were actually eight inches too wide.

John So literally 25 percent of the platforms across the country, the platform, I’m sorry, the platforms were too wide and the train could not fit in the station literally eight inches. They could not fit in the station. That’s like buying a Ferrari, but it’s your garage is not big enough. It doesn’t fit. It’s like, Wait a sec, why don’t we spend all this money $20 billion on new trains? Yet 25 percent of our platforms now. This was 13 platforms, 13 under platforms, 300 took months. They did, like months and months and months, and work lots of money they didn’t like in the middle of the night. They didn’t want to like people the no, I think it was embarrassing and they still had to get done with that, and they had a thousand more to do as 3500 platforms that were eight inches to why they could not fit these trains. It actually ended up costing taxpayers sixty five million dollars.

John Sixty five million dollars. And again, this problem is that they had measured some of the platforms, but not all of the platforms. Some of them, not all of them. Major, major problem. Avoidable. And literally, it was kind of this comical. I mean, obviously, people went to town and their thoughts and feelings and all kinds of stuff about this whole dilemma. Could you imagine paying that $65 million at a taxpayer money because they had only measured some of the platforms and they had to reduce the size of $3500? OK. Bottom line. And I’m not picking on, you know, France by any means. People make decisions like this all the time.

John They make mistakes like this. Companies, individuals, countries make mistakes like this all the time. One of the most important things to do in making the decision, I just talked to a workshop on decision making. One of the most important things is you have to ensure that you have accurate data. You’ve got to make sure you’re looking at accurate information to make a decision. In this case, they thought they did. They had a small sample that they thought was representative of the whole, which I see that mistake happening so much all the time. And it was inaccurate. It was misinformation.

John So I want you to think about this. You’re the CEO of a company or senior leader of your organization, and you’re making a decision based on feedback from a small portion of people that you assume is representative of the whole. And it may not be. We do that. Oftentimes we just assume the loudest voice we hear is representative of everybody. And oftentimes, and I will say most of the time, it’s actually not that person, just by their nature, is more vocal. They’re more outspoken. They have stronger opinions about things. But oftentimes, and most of the times, they’re not representative of the whole. So you have to be very careful as a leader.

John It’s whatever. It’s all different, diverse sub group representation rather of your organization, all different types of backgrounds, everything that’s going to give you more accurate info. If part of it is figuring out, OK, I need to understand what is happening, where our process breaks down. I can’t just look at and observe, you know, two or so, if I if I’m running a bunch of Starbucks and I’m trying to figure out why are people not ordering this new, you know, venti, you know, triple latte, whatever that’s just come out. That’s a new thing on the menu. I can’t just go to one Starbucks and sit there for an hour and talk to maybe the baristas and figure out the answer to that. It’s probably going to be much bigger than that, right? So I can’t I have to I have to ensure that the data that I’m getting is accurate.

John I think that’s one of the most difficult. Things in decision making, decision making that leaders face, it’s very hard to get all the information, but once you do, that decision oftentimes becomes a lot clearer. So if you’re struggling to make a decision, ask yourself if you’ve got a big decision coming up. Ask yourself, how confident am I that I am truly looking at accurate information? And I have all the data to be able to make the right decision. If you’re not 100 percent confident, go back, recheck, go through and just accumulate. Do better due diligence whatever you have to do, so that you’re looking at the total picture. Again, I’ve used the analogy. Sometimes we look at one or two or three pixels and we draw a whole picture based on that. And in reality, it could be an entirely different picture.

John Those pixels could be something totally different. So don’t let your mind create a picture that just doesn’t exist or is dramatically or drastically or grossly overstated or inaccurate. That does not serve you well and making great decisions. You’re never going to be able to make all decisions right, of course. But if you can make one or two great decisions every year that you would not have otherwise made. So if your process for making decisions and over the course of a few of these podcasts, we’re going to go through different things. I’m going to talk about cognitive biases next time. But if you can be conscious of some of these and improve your decision making even one or two percent, that’s going to be one or two big decisions a year that you make that are good ones instead of bad ones that you might regret.

John And that’s my hope is that I can share with you some of the ways that I’ve seen the best leaders out there use to make better decisions, both personally and for their businesses, and ultimately leads to long term success. So just a quick story that I thought was interesting to emphasize a point. And again, I love your stories, by the way. Share them with me. Give me your examples, your ideas. And as always, I appreciate you listening. I appreciate you subscribing. I appreciate you sharing, liking, commenting all that kind of good stuff. And of course, go down below. Give five star review and we will see you next time. Thanks, everybody.