328 - The Power Of A Mentor - John Laurito Skip to content 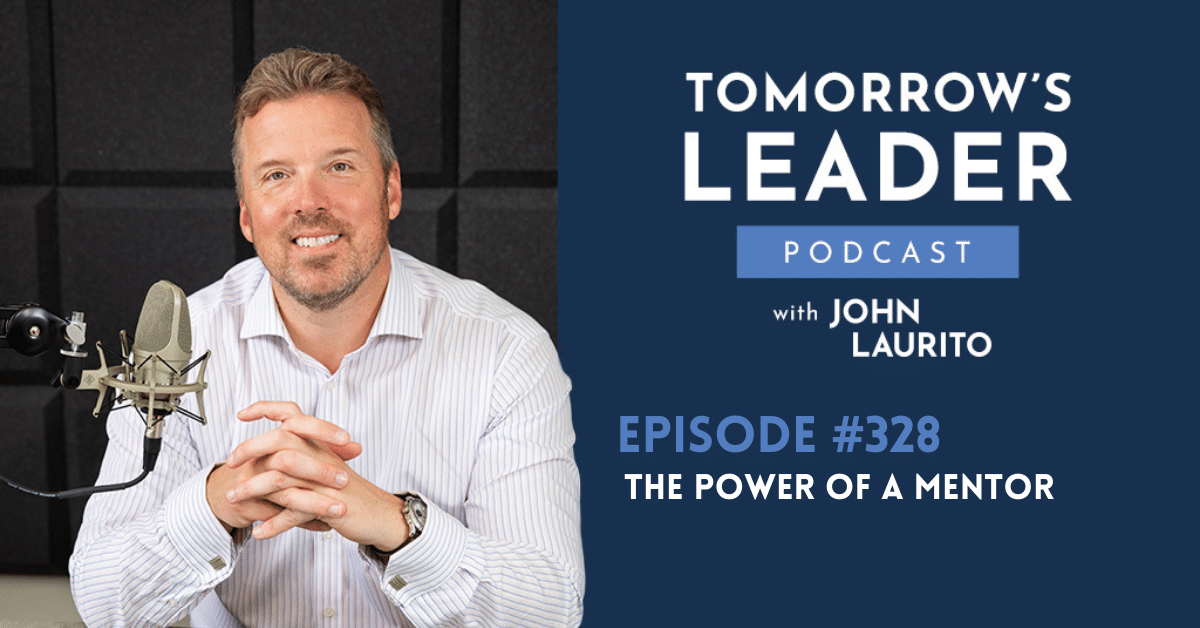 A mentor is a person who gives a younger or less experienced person help and advice over a period of time. Today host John Laurito talks about the importance of having a mentor and how it impacts and changes your life by simply adding someone in your life who can guide you and help you learn the ropes of something you want to excel on.

[5:48] What doesn’t make the mentorship successful?

John All right Tomorrow’s Leaders. Welcome to this show. Great to be with you again today. I’ve got a short but impactful episode for you, partly because I’m feeling a little under the weather and partly because I hear you loud and clear. You like the short episodes, the short but impactful messages. And I’ve got one for you today for sure. I recently talked to a fantastic leader, a CEO that’s running a two and a half billion dollar a year business and just super, super sharp. His name is Brendan Keegan and he’s actually on an upcoming episode of tomorrow’s Leader. I got a chance to spend some time with him and had a pretty in-depth conversation about leadership. Definitely, definitely. Tune in for that episode. And one of the things that we talked about and in short story is he transformed this company and in five years grew it five times. I mean, unbelievable, unbelievable growth. And I was asking him a lot about his secret to success. I’m not going to take away too much from the episode because you’ll have to listen to that. There’s lots of really, really meaty stuff in there. But one of the things he brought up as being one of the most impactful things that he ever did, one of the biggest contributors to his is success, which I think is such a great takeaway is he said, you know, I owe so much of my success to the fact that I’ve had five mentors in my life that were incredibly impactful.

John You know, they helped steer me in the right direction. They helped me take the right steps at the right time. They sometimes helped me avoid making a disastrous step or decision. And they were the ones I learned from and they were the ones that pushed me. They were the ones that challenged me. And I just learned immensely from them. And I thought at first, I’m like, wow, five mentors. That’s phenomenal. I don’t know if many people have five people that they would look at as a mentor. Usually maybe one, maybe two. Many people don’t have a mentor. And I’m not just talking about the people that you surround yourself with because that’s those are the people that you are influenced by. And it’s similar to a mentorship, but I’m talking about really an intentional and deliberate relationship for a specific purpose, and it doesn’t mean it can’t be a friendship. I’m not talking about strictly a business relationship or a mentor relationship, but a relationship where you are trying to have something very specific that this person has rub off on you. You’re trying to learn something, one aspect of life that they tend to do really well and have mastered, and they’re somebody that is leading you through the course of your life and your decisions in whatever area that may be. And it just got me thinking that’s kind of a cool challenge to say, okay, can you as a result of listening to this episode here, can you had at least one mentor to your life? And I’m going to do this, I’m going to take on this challenge. And I think about, you know, how you define a mentor. It could be anybody it could be anybody in any area of your life that’s doing really well in a certain area of your life that you want to improve.

John And they genuinely want to give back. And they know. That part of the success that they’ve had is because somebody did that with them. I look at Brendan Keegan, I’m sure that he is willing to mentor other people because he had the benefit of these five mentors that impacted his life so dramatically. So I think about this now. What I’ve always found that that makes a mentorship successful. What doesn’t make a mentorship successful is if I’m the mentee and I ask somebody to mentor me with something and then I leave it up to them to lead the relationship, that doesn’t work. So if I’m the mentee, I’ve got to own that relationship, which means I’ve got to be the one to keep it going. I’ve got to be the one to reach out. And whether it’s a formal, kind of structured thing where you’re meeting or talking on a regular basis or it’s informal, but I’ve got to be the one that’s got to initiate. I’ve got to be the one that’s opening the door and keeping the door open and keeping the conversation and communication fluid. And I find if you do that, that that will build a great basis for so much learning and takeaways. It’s unbelievable. Some mentorships might be a coach that you hire. I have a coach that I hire. I’ve heard that before who’s fantastic, Peter Velarde, who I’ve mentioned who have had on this show before. He’s been my mentor and coach for many years. He provides me something that I don’t have and that’s the ability to look at me and see some of the things that I don’t see is able to provide some insight in areas that I’m not thinking through or maybe provides a message that I need to hear at the right time that I’m not necessarily giving myself.

John Everybody needs somebody like that. And so I encourage you to think about whether it’s a paid coach and relationship with somebody or it’s not or you have a mix of people. I look at that as an investment in yourself in terms of time and money to build these types of mentorships. But there’s all kinds of people that are willing to be someone who has that positive influence, and you just have to reach out and ask.

John So my challenge to you is to take this message like I am and add at least one mentor into your life that you don’t have right now, maybe there in your life kind of peripherally or in some capacity, but you’re not getting that type of tutelage or learn learning from them. And you want to you run, tap into that. So reach out to them and begin that journey for them being able to mentor you. My guess is if you ask the question, you’re going to get a very easy yes and the door’s open now for you to develop in a whole different area and a whole different way than you did before.

John So with that, my promise kept I’m keeping it short, giving you your day back. A nice little eight minute episode for you. I hope you’re doing well. Reach out to me. Let me know how things are going, how I can help. I’m here for you. And as always, like share, subscribe, go down below. Give a five star review and we’ll see you next time. Bye.

PrevPrevious327 – Hit The Bullseye with Jeff Blackman
Next329 – Elevate, Innovate and Accelerate with Brendan KeeganNext