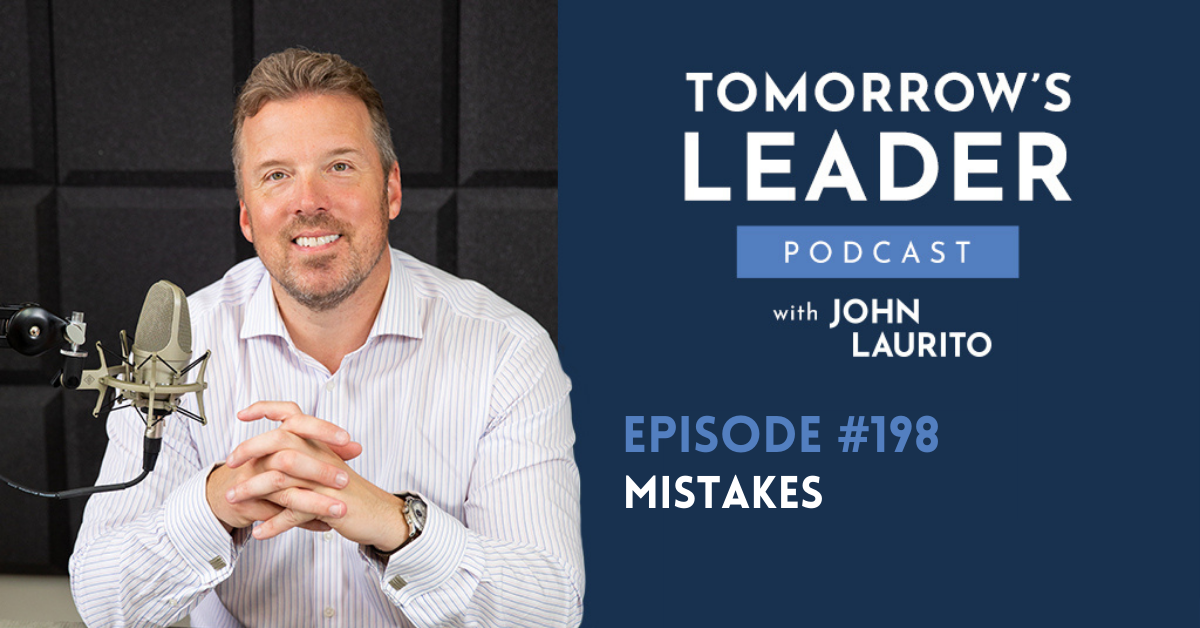 In this episode, John Laurito shares a story he experienced from the grocery store that had to do with him buying a turkey. Don’t worry, this isn’t going to be about the meat; rather, it’s about the guy from the deli counter. The mistake he made will serve as an excellent lesson for today’s episode. If you are a leader or a parent, think of the environment your team or kids are breeding in when it comes to mistakes.

[4:01] How parents can relate to this episode

[6:28] The two different types of mistakes that leaders should be able to differentiate

John Over the last two decades, I’ve been on a quest to learn everything I can about leadership obsessed with what makes the best leaders so good after running companies small and large for the last 20 years. Today I speak on stages all across the world to audiences who are interested in that same question. My name is John Laurito and I’m your host. I invite you to join me on this journey as we explore this topic. What makes the best leaders so good? Welcome to tomorrow’s leader! All right, welcome to today’s episode of Tomorrow’s Leader, where we dove deep on all things leader related related to living yourself and leading others.

John I am John Laurito, and it is story time, story time with John Laurito. Maybe I’ll rename the podcast that. Story time stories about leadership and you with John Laurito. And I’m going to do the whole episode in this announcer’s voice. That’s right. Starts Friday at a theater near you. I’m just going to keep doing that because it’s fun. I like doing it.

John And so I had this two and a half pounds of turkey. I didn’t end up eating it. It went bad. So I ended up paying for this guy’s mistake. And that’s my message. Or my point today is you’ve heard me talk a lot about mistakes and failures and setbacks and risks and whatnot. You have to, as a leader, bring an organization where it’s OK for people to make mistakes. You have to. If you don’t, then you’re going to have people that are so gun shy and not taking any action because they’re so afraid to go out of the lines or make a mistake and face the consequences. But at the same point, if you don’t have an environment where people have consequences or experience any kind of consequence for mistake, that’s not good either.

John So you have to find that balance. You’ve got to breed that environment where it’s OK for people to take chances, but they also have to know what comes with making a mistake. In this case, this was simple. This guy put an extra pound of turkey on his cost, then as he’s got to take it out and repackage it and figure out what to do with the other pound of turkey, whatever. It’s no big deal, but instead I absorbed the cost of his mistake. Now my bad because I did it willingly. But that was the wrong thing that did not teach him anything because there was no consequence to his mistake. So you have to be careful there, so it can’t be too harsh. But I think about like, you know, how many times as parents to your son or daughter go to school and they forget their team uniform, you know, that’s a tough one. And I might get all kinds of parents give me different opinions on this.

John But you know, I think in that situation, if my kid does that, they’ve got to experience going into the game without a uniform or practice without all their equipment. Otherwise, they’re not going to take responsibility if they know that mom and dad is going to bail them out every time. At some point they’ve got to feel some consequence for being making a mistake. Now, in some cases, mistakes. I look at mistakes to two different ones. They’re mistakes that you make from trying something new, stepping outside your comfort zone, taking on a risk and you make a mistake and you look back and you say, Hey, that’s just part of success is you’re going to be making mistakes like that and you’re going to have failures.

John But I also look, there’s some mistakes that are made just out of laziness. This guy, the deli counter probably wasn’t listening to me. And how many times you’ve been a deli counter and they have to ask you three or four times, how much did you want again? Was it a pound? What was it? A pound and a half? OK, I’m I should only have to say it once. I’m going to say here is. Listen. So this guy reality was just being lazy, either he didn’t listen to me or he wasn’t really looking and measuring as he should have been doing, it was laziness. That’s purely why he made that mistake in reality. So that’s a different type of mistake, and there has to be a consequence for that. So again, my message is just think about the environment that you’re breeding with mistakes in particular and in that fine line of encouraging mistakes.

John But if you’re encouraging, then people are making them and there’s no consequence to them whatsoever, especially if it’s something borne out of laziness or just not following a process or a normal procedure. There has to be some kind of consequence. Otherwise that mistake is just going to continue to be made. There’s no pain associated with it. So there has to be something. Otherwise, you’re going to repeat that situation. This guy probably has done that a zillion times. I don’t know. I mean, it’s a small, stupid example. But in reality, if I wanted to change his behavior, I’ve got to have him acknowledge and understand that that’s that’s not good that people get now.

John Got a bad taste in my mouth because I blew whatever amount of money on on turkey that went bad because it wasn’t my fault it was his. A small, stupid example. But you get my point as a leader of an organization or business, you’ve got to create that environment where your employees or the people that are there, the associates are are doing things, taking right types of risks and the failures are coming from that, stepping outside the box and taking risks that that they might not have otherwise versus mistakes and failures that come from being lazy or not paying attention or not following a system or process.

John Two very, very different types of mistakes. And as a leader, you got to differentiate that and you’ve got to set that tone in your culture. So quick message today. Want to get that out there? Share that story. Hope that was helpful. Again, my job is to get your wheels turning. Think about your own organization, you as a leader, how you’re addressing this kind of stuff. And who knows, maybe next time you go to a deli counter now you got something in your mind that’s going to make sure you’re watching that guy or that girl is there putting that turkey on that scale. You know, I’ve got my eyes right on that thing now moving forward, so it won’t happen again.

John Anyways, thanks as always for listening. I appreciate your ideas and suggestions for topics and future guests. Do me a favor? Go down below. Make sure you rate this show just so you know how this works. The more you like this show in particular, the more high ratings you give on the podcast. If you go to Apple Podcasts or Spotify or whatever or Google Podcasts go down and rate the show, and that helps the analytics so that it gets to more people.

John I would appreciate that because we want to grow the audience and your feedback and your reading of this show helps to do that. So that’s one ActionScript that I’ll ask of you today. If you could do that would be greatly appreciated. So with that said, hope you have a great one. We’ll look forward to seeing you next time. Thanks, everybody. Bye.