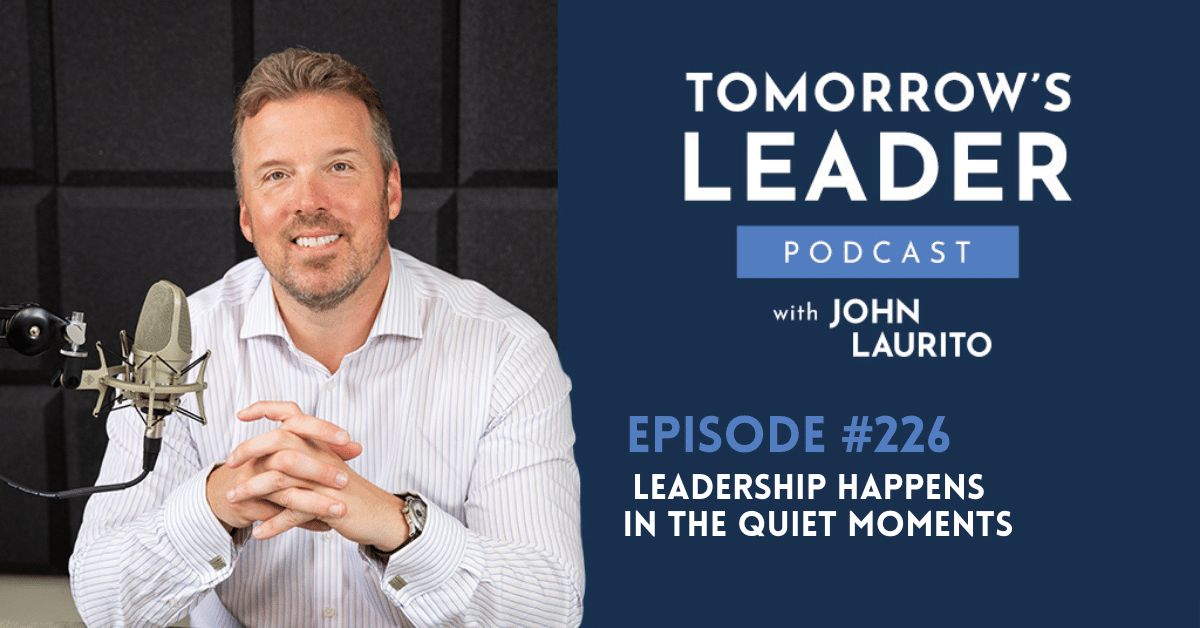 226 – Leadership Happens in the Quiet Moments

In this episode, host John Laurito talks about leadership that happens in quiet moments. Although leadership usually happens during high-energy and intense moments, it is more effective when given in noiseless and calm times. So take this episode to heart, and perhaps you can start making changes on how you lead yourself or your team.

John Over the last two decades, I’ve been on a quest to learn everything I can about leadership obsessed with what makes the best leaders so good after running companies small and large for the last 20 years. Today I speak on stages all across the world to audiences who are interested in that same question. My name’s John Laurito and I’m your host. I invite you to join me on this journey as we explore this topic. What makes the best leader so good? Welcome to tomorrow’s leader!

John All right. Welcome to today’s episode of Tomorrow’s Leader, where we dove deep on all things leader related related to leading yourself and leading others, I am John Laurito, your host today. And it is 6:30 at night on a Monday night and I am after this podcast, I get to drive to Pinehurst, North Carolina, which is actually not far. It’s only about an hour away because I get to do a keynote tomorrow for a company that I’m really excited about. And then I get an opportunity there to play on Pinehurst for those golfers that are out there, you know, Pinehurst is one of the best courses in the world, Pinehurst number two.

John So very, very excited about that. So nanny meaning and, you know, is felt like throwing that out there because I’m excited about it anyway. So today’s leadership lesson, this comes courtesy of my nephew, Gavin Draper. I’ve done an episode last couple of weeks ago where he gave me some good leadership insight. This actually comes from just watching him wrestle. There’s all kinds of great stuff that you can take away from watching him or anybody wrestle. I mean, wow, what did just unbelievable example of leaving yourself the discipline that this kid or these kids have to go through is unreal. If they’re really taking it seriously, which he definitely does, so he’ll he’ll wrestle and he’s won multiple tournaments. He wrestles at 150 and basically dominates.

John It’s really cool to see, and it’s from sheer hard work. His dad, Jeff, was a wrestler growing up and is super talented and skilled and teaches him a lot, and Gavin just absorbs and executes. It’s phenomenal, but then don’t come back from a day of wrestling, literally. They go from eight a.m. till seven at night and he’ll wrestle five matches exhausted and he’ll come home and work out. I mean, it’s unreal. So anyways, I love that, but I will say it’s kind of interesting when you go to these wrestling tournaments. For those of you who’ve never been at one. It’s at a gym. You’ve got a bunch of usually a couple of matches going on, at least at the same time. And there is just yelling, it’s loud. Understandably, I mean, everybody’s cheering and stuff, but even the coaches like what’s interesting.

John A lot of sports, you don’t see this, but in wrestling at certain levels, his level, you will hear even the coaches on the sideline yelling, just giving him instruction. And you know, the dads are the moms are everybody is giving the wrestler direction and leadership in essence in the heat of the moment. And what’s interesting when you go to the higher levels like college and you watch college wrestling, you don’t see that that actually doesn’t happen. The coach is quiet, silent through the whole thing, just stands there and watches. And the reason why is that they have already taught that wrestler and led him or her in the quiet moments. I mean, it’s not in the heat of the heat of the battle. It’s not in that really stressful situation where they’re delivering the leadership.

John They’ve already done it. And at this point, this is all about execution. So I just found it’s very interesting and I haven’t gone. I’ve seen a few of the college wrestling, you know, Jeff talked to me and shared with these, you reminded me of this difference. I’m like, Wow, yeah, you’re right. I get it at the lower levels. You know, the coaching is happening during the match, which it’s really ineffective. You know, the wrestler, you know, that’s having to hear it. I mean, Gavin doesn’t hear he’s got his head piece on. It’s covering his ears. Also, it’s like, you know, you’re not hearing everything. You’re focused on executing right there in the moment. So here’s my point with this leadership does take place in the quiet moments, and what we sometimes forget is when there is no conflict or there’s no issue or there’s no spotlight and need to perform, that’s usually our temptation when we want to deliver leadership.

John But that’s not actually the most effective because that person’s mind is already somewhere else. They’re already on, OK, I’ve got to execute. It’s like somebody’s going to do a big presentation and they’re walking up the steps of the stage and somebody selling them. Hey, remember these three things when you’re giving your presentation, it’s too late. That’s got to be in rehearsal. It’s got to be in the preparation. Not now during performance time. So I think many leaders just opt to try and lead during the moment in performance. And it’s not as effective as the leadership that takes place when things are calm, because that’s when it sinks in. And that’s where you’re training your muscle memory and you’re just you’re you’re now driving a message home.

John And that’s the key thing. So, you know, oftentimes I’ve worked with leaders and I said, you know, if you’ve got if you’ve got an issue with someone and you’re delivering, let’s say, a tough message, don’t deliver it at a point where emotions are high. Don’t deliver it necessarily, and I’m not saying that’s not sometimes the way to do it. But in the moment is not sometimes as effective as letting things settle and then coming back to it when there are no emotions and saying, Hey, I need to talk to you about something.

John That person is usually more receptive, and that message will carry a little bit more weight because they realize it’s not emotional. They realize you’ve had some time to absorb it and sink in. And they now will be a better place to retain that and hear that and take some action on it. So just a couple of thoughts. I thought that was really interesting as contrasting the high school level of coaching, so to speak, versus collegiate level. And that’s no knock on the high school coaches. That’s just a different level and way to lead. And it’s just a really stark difference. So take it from wrestling a good lesson in leadership.

John So that’s your five minute, six minute lesson today. Quick one, because I going to head to Pinehurst and even hope this was helpful. Enjoy. Share. Like Subscribe. Go down below. Give five-star reviews, all that kind of good stuff, and I look forward to seeing you next time. Thanks, bye!