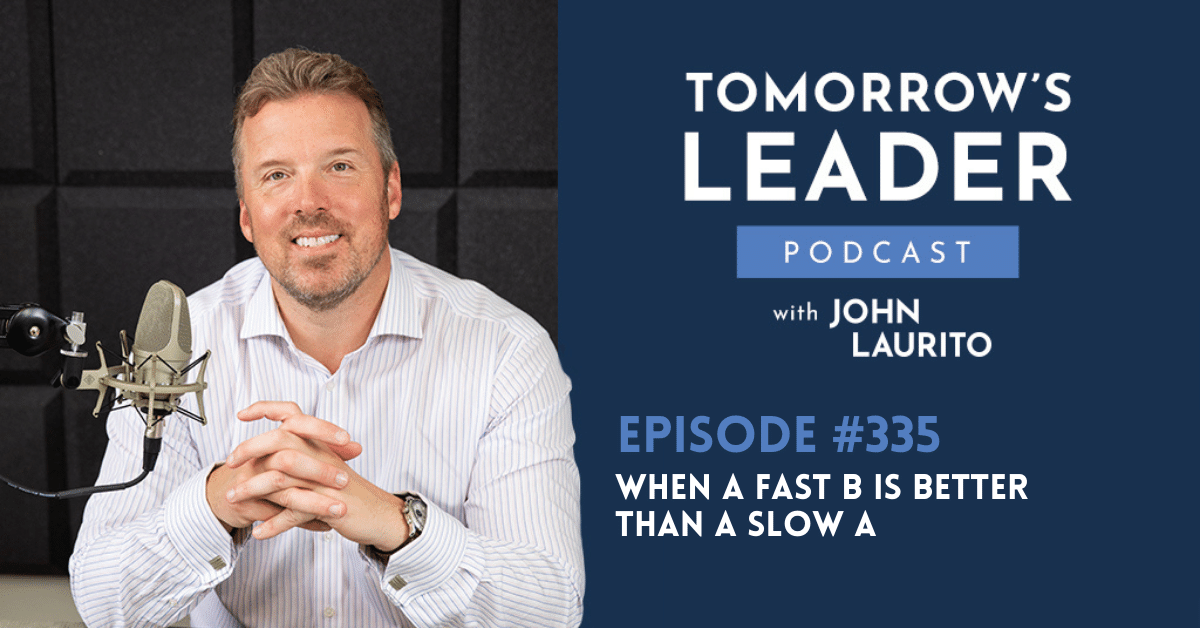 In the business world, there is a constant tug-of-war between doing something ‘right’ and doing it fast. Should leadership prioritize speed or quality? Today host John Laurito talks about the age-old dilemma: Is speed more important than quality? It depends on the situational context – but even then, the right answer can be far from obvious.

John All right, tomorrow’s leaders. Welcome back to the show. Happy post-Thanksgiving. I’m recording this the week after Thanksgiving, taking a little bit of time off a few days from the podcasting, because my whole life was consumed with trying to figure out how to perfect the turkey. And that’s a lot of pressure. I had 16 people over to feed and the turkey. I got to say, I’m pretty well deal with pressure, but wow, this was really a lot and I had gotten a smoker. It was my first time using the smoker to talk about testing out a new method of cooking and a new piece of equipment on a high stakes meal like Thanksgiving. And I cooked two turkeys in this thing. I got to say, they came out absolutely fantastic. Super pleased. If you’ve never smoked anything. Wow, it is. Incredible. Kind of a cool concept. You just put it in there and you let it sit for six, seven, 8 hours and not worry about it and then go on to your other parts of your day and doing whatever else you want to do. And then you open it up and it’s done a little harder than that, but for the most part, pretty easy.

John Okay, let’s get to today’s topic. So. I was working with a leader. I’ll give her some props for this because I heard this phrase from her and I’m like, Wait a sec. What? Let me write this down. What was this? I’d never heard it was such a simple thing, but it just resonated with me so, so well. And the phrase was Winnie. And we were talking about doing a bunch of stuff and some things that needed to get done and just said, you know what, we need a fast B on this, not a slow a. And I’m like, Wait, what? We need a fast be, not a slow a Diane McCarthy. Outstanding. Love it. I’m not sure exactly if you created that or where that came from, but that resonated so much with me. I thought I’d bring it to the show and share with the audience. And here’s the deal. And you heard me, I think a few weeks ago, I did an episode on just the problems of being a perfectionist. And so many times I find this and I find leaders and organizations that I work with that are plagued with this problem. They’re trying to get everything so right that they sacrifice speed when in reality, speed is more important at that moment than quality in the sense of trying to get it to an AA. And sometimes I’ve seen things that should have only taken a month, that took a year or sort of taken a day, that took a month, whatever it is, or in some situations. And you know what I’m talking about, sometimes you never do anything and I will self admittedly say there are things that I have done and started and gotten even to like the one yard line that I never did because I didn’t feel it was perfect.

John I look back and I’m like, I should have just pressed the go button. I should have just done it because that really, really good. B B-plus, maybe even an A-minus would have been better than an unimplemented, you know, A in my mind or A-plus in my mind. How many times do we deal with this? So I just thought that was great leadership and from Diane. And I thought in reality, what happened then? The result was that task, what needed to get done was done, and it was done in the right time, and it was done in reality and quality. And I think leaders sometimes we miss that, right? We don’t communicate that to our teams or to organizations of what we’re looking for. What is more important is it speeders? Are quality, is it A fast B or is it a slow A? Now there are some things you don’t want to ever do a fast B on. You don’t want a fast to be a hire. You don’t want to hire somebody. And just quickly, just for the sake of hiring them. That, in my opinion, is a slow a there’s nothing more important than getting hiring decisions. Right? Um, you know, developing people in your organization, that’s a slow a that’s an ongoing type of process. But don’t think about and especially these small things that are on your plate that are on your to do list about the need to get everything done perfectly. There’s so much to be said for implementation, and in many cases you see how fast things move in our society. My gosh, it’s unbelievable how much changes in such period of time. So what you’re working on right now may be relevant, but only relevant if it’s implemented and put out to people or done in a timely fashion.

John If it’s a month or two or sometimes a few days, it can be much less relevant. I think about communication. I think about how many times I hear or see or experience where communication was done in. Sometimes it’s done even the right way, but the timing is off. They deliver a message and it’s already permeated and rippled through parts of the organization. And people are already deducing or making certain conclusions that are not right because the timing wasn’t quick. And maybe the problem was they were trying to get the message so perfect that in fact they sacrificed speed and ultimately the message got out there too late. This applies to everything. So think about this and there are times as a and just think about if you’re a service provider, you’re providing a certain service. I don’t care what your industry is. If you if you’re in landscaping, if you’re doing consulting, if you’re doing a recruiting for a firm, if you’re doing wallpaper, whatever the case is, part of this is understanding what the client is really looking for. Are they more interested in A, fast, B, or slow way? Because you’ve got a lot of times that I feel this sometimes when I’m looking for something is something to get done. I just need it to get done quickly and I’m okay with a B, but the service provider is actually operating on a slow a mentality and and that’s okay, but it would be much better to understand that and set the expectations. So one of my takeaways from that is we can do a better job just asking, hey, if we’re unclear or maybe whatever side of the table we’re on is asking, Hey, is this something that needs to be a fast B or slow way? What’s the timeframe? What are we actually looking at and what are we trying to get to? I think sometimes the absence of that conversation and that leadership leads somebody down a path of ultimately trying to get it so perfect.

John It just takes so long and it never, ever gets done. I get frustrated when I see that. How many things in your organization have you talked about or talked about delivering in a certain period of. Haim are doing in a certain period of time, and then all of a sudden it doesn’t get done. And the reason is because we’re trying to deliver something and get it so perfect. And I’m not saying this theme of this podcast is not sacrificing quality and as an overall theme, but it’s also it’s knowing when to deliver something at A, B or B plus quickly and knowing when you really need to take the time to take, take, take the steps and go into the detail to get it down to an A or get it up to an A. That is key.

John So quick leadership message again, quick episode here. Another quick episode. I greatly appreciate your followership, your listenership. I appreciate your insights, your ideas. I’ve had a ton of great, great guests on. I appreciate your feedback on that. Some really interesting ones coming up, coming up soon that have not been published yet. So stay tuned for that as always. Like share, subscribe, go down below, give a five star review. Yes, that’s very meaningful. And we’ll see you next time. Thanks, everybody. Bye. 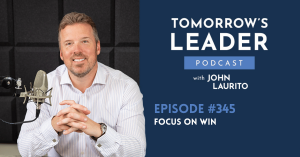