168- Form your own opinion - John Laurito Skip to content 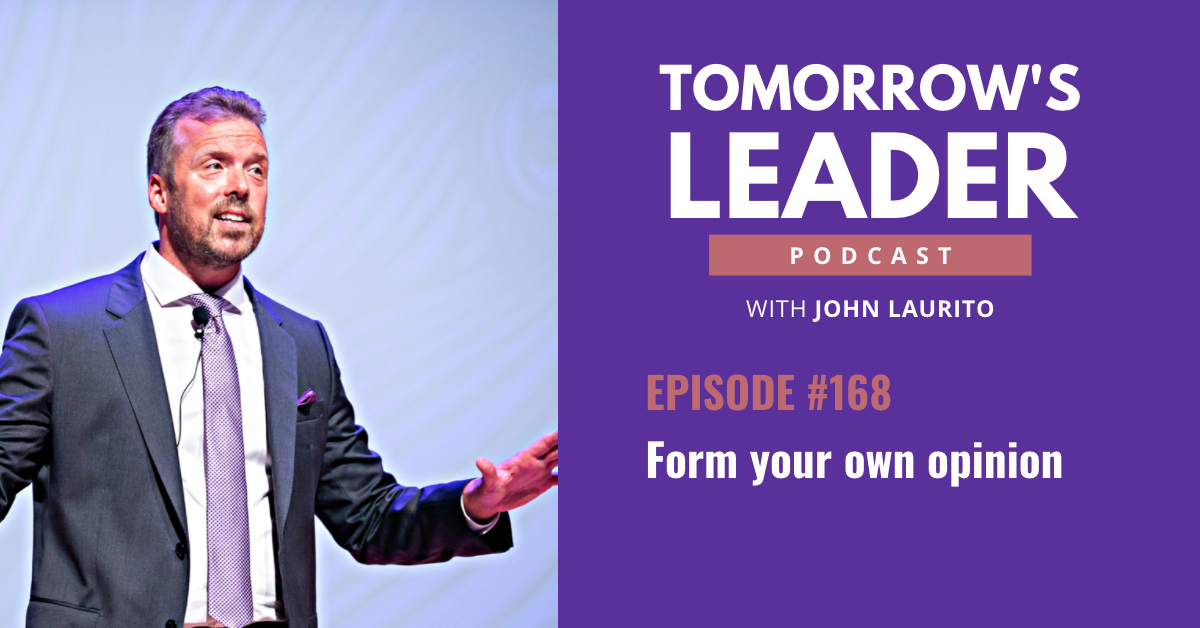 Today’s episode is something that host John Laurito wants to share directly to leaders. Whether you’re being promoted, forming a new team, or taking over an old one, this message is for you. Understand that there is danger in relying too much on the feedback and opinion of the previous leader or anyone aside from yourself. Make sure you take on your new role and face your new team with an open mind and not with a clouded judgment. This is going to be a fascinating (and quick) episode, so make sure you stay tuned.

[2:16] Here’s what usually happens if you rely on someone’s opinion

[6:34] Understand that YOUR opinion is the only one that matters

John: All right, welcome to today’s episode of Tomorrow’s Leader, where we dove deep on all things leader-related, related to leading yourself and leading others. I’m John Laurito, your host today and every day. So I have mentioned I know many times my book is now out. I will begin every podcast for the foreseeable future with an announcement. I’m very excited about it. Tomorrow’s Leader. How the best leaders get better in a fast-changing world is now available on Amazon. You can look, you can download it instantly, order the hard copy. So for those of you that enjoy these podcasts, be sure to check them out.

John: OK, today’s messages to all those leaders that are taking on new assignments. And I’m talking to leaders that maybe you got a promotion and you now have a new group of people you’re working with. You’ve got a new office that you’re running. Maybe you’re a coach, you get a new team that you’re running. The bottom line is you have a new group of people that you’re now working with and you don’t know them and you’re now getting to know them. You’re coming into this new organization and there are all kinds of stuff that are on your mind.

John: I want to talk about one specific thing that I see ultimately sometimes hampering a new leader’s performance. And it happened to me it’s happened to me actually a couple of times in my career. And that is when you were taking over an organization. The tendency is to oftentimes rely overly so on the opinion, in the feedback, in the input of the prior leader. Now, I’m not saying this is not helpful to some degree, but I find that in certain situations where a leader is taking over a new organization, it is because that prior leader in many cases was not doing the job that they needed to do now in some cases are retiring or they’re moving on to another role. And that’s fine.

John: But in many cases, that leader has not had a lot of success. And that’s the very reason why you’re taking over the team or you got the promotion and you’re now taking over that branch, whatever the case may be. So here’s the tendency and I’ve been in situations like this before. I remember taking over an office and this office was a large office and I had really no knowledge of any of the people in this office. I had heard some names before and whatnot, but I really didn’t know anything about this place. And the leader that had been there prior to me gave me kind of the rundown on some of the managers.

John: Now, there were, I think, eight or nine managers that would be reporting to me in this new office. And I remember distinctly going through I remember listening really carefully, going through, taking notes. And I just, again, knew names and I had, you know, three pages of notes on each person. So I went in there with a certain expectation around these leaders based on the opinion of the departing leader. Now, the mistake that I made is I, I, I overly

weighted his opinion. And so I went into a couple of these interactions already with some preconceived notions.

John: And in several cases, I could not have been more wrong. I remember two of the leaders, one of the leaders this prior person had told me was ultra high potential, ultra-high potential. This was your number one of the eight people. This was your number one person. And so immediately I’m thinking, OK, this is the person I’ve really got to start spending a lot of time with. I’ve got to really kind of position them as the next in line. I’ve got to give them a lot of control and a lot of influence and a lot of scopes.

John: And I had also with my conversations with this person, learned about another individual that he felt was not even at the caliber of being by being part of the team and really questioning whether or not he should be on the team now. And how are you going to really have to, you know, watch him closely? He’s probably not long for this role. So, again, I went into this thinking that these two people, one was stellar and the other was barely going to be keeping his job. Well, I ended up and it probably took me a few months because I had to ultimately come to the conclusion that, you know what, this prior leader had no idea what he was talking about.

John: He could not have been more wrong. In fact, the one that he felt was a superstar ultimately, I realized, did not have the capacity, did not have the not the capacity, the competence and the skill and the will set to really achieve high levels of success. And ultimately, he was not a fit for the role. And I ended up moving him in and or demoting him into a different type of role. On contrary, the other leader that this person felt was not a fit turned out to be an absolute superstar and ultimately got. Ran other offices, had tremendous, tremendous success, and was recognized across the country.

John: But bottom line, he was wrong and I just gave too much credit to him. And because of that, I probably lost two to three months in my own generation of results and getting that place really to the high-level performance that it ultimately got to. But I had to snap out of it and realize, you know what, it’s my opinion that matters. I’m the one that’s working with these people and I need to assess their skill sets and their will sets and ultimate potential and how I’m going to work with them and lead them.

John: So my cautionary note to all those leaders that are going into a new situation, it’s OK to kind of get a little bit of the low down and a little bit of the 411 on all the info that’s going on in that organization. But really, really, really take it with a grain of salt and realize it’s your opinion that matters. You are being brought in there for a reason. You are the one that needs to assess where the strengths are, the weaknesses, the gaps, the opportunities, the potential talent, the people that don’t belong in their roles. That is your decision. And go in there with a clear mind and an open mind. Don’t be tainted by the fact that other people have strong opinions one way or the other. All right.

John: So that’s my lesson. I want to pass it on to you. I’ve seen that happen many, many times before. I don’t want to happen to have it happen to you. Trust your own opinion, form your own opinion, OK? You are the one that’s in charge. You’re the leader of that organization. All right. So quick one today. Seven minutes. I’ll give you back some time in your day. Hope you enjoyed this. As always. Stay tuned for future great topics. I want your suggestions, your ideas, things that you might be struggling with as a leader, or questions you have.

John: I get lots of great questions from all of you out there who are listening, and I greatly appreciate that, as well as your suggestions for future guests on the show. I’ve got great guests lined up for you and most of them come from suggestions from you. So I greatly appreciate that. As always, share, like, subscribe, go down below, give a five-star review and I will see you next time. Thanks, everybody. Take care.