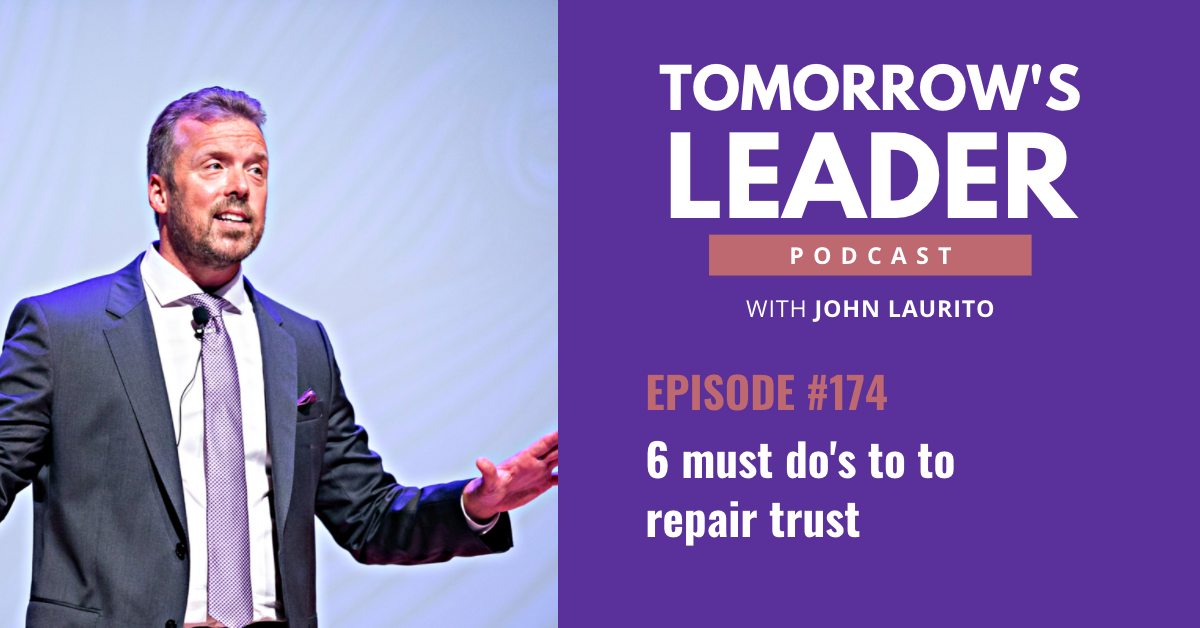 In this episode, host John Laurito talks about how to repair trust. If you are a new leader about to take over a team or organization whose trust has suffered or the actual reason for the team’s trust to dip so low, this episode is going to help you. John shares the 6 things that leaders NEED to do to help rebuild the trust in their team.

John: All right, welcome to today’s episode of Tomorrow’s Leader, where we dive deep on all things leader-related, related to leading yourself and leading others. I am John Laurito today and every day. So today I want to talk about a follow up to one of my prior episodes. I’ve talked about trust a lot. I’ve had episodes of what are the 10 things that you might be doing as a leader that you don’t even realize, that are breaking trust. Go back and listen to those episodes. There were two back to back episodes, I’m going to say, probably six months ago, easily, maybe a year ago. And they were very popular, very well worth your time, quick episodes, but full of stuff.

John: I want to talk about how to repair trust with a lot of leaders I talked to. That’s OK. I get it. I did something that broke trust. How do I build it back? Can I, or they, might be a leader taking over an organization that has had a lack of trust. It has nothing to do with that leader. But there is an organization and this is tough there is an organization where the trust level is not high. So they are paying the price for maybe their predecessor. So I want to talk through what are six things that you can do that you need to do that will help to rebuild it. It will not happen overnight and it may not even get to 100 percent, but over time, it will get better and better and better. It’s different if you’re a new leader that wasn’t responsible for breaking the trust or losing it as it is for somebody who actually was. But both of these will apply to both.

John: Here’s number one. Number one is seek to understand, don’t go into talking mode, ask questions. Can you share it with me? Talk to me a little bit about what happened and why do you feel the way that you do? I understand it. You’ve got to empathize. You’ve got to sympathize. You’ve got to understand their perspective. OK, talk to me a little bit about what you think. There might be things that I did or predecessor did that I’m not even aware of, that I wasn’t even conscious of. And there might be some things that I do. But tell me how you feel about what happened and why. OK, that’s not number one. Most important.

John: Number two, that goes along with this. Don’t get defensive. The moment you start to get defensive is the moment the wall goes up or stays up when they feel like there’s not an ability for somebody to truly listen with open ears and an open mind, they will stop communicating. They’ll stop sharing with you. So you have to listen, not in a defensive way.

John: That’s number two on to number three, full transparency. OK, that is absolutely key. Full transparency is critical. So from day one and moving forward, whatever this point in time is, you have to be fully transparent with this person, with this organization about everything. It doesn’t mean you’re not going to be delivering bad news. You are when you tell the truth and you’re transparent, you’re delivering bad news. You have to ultimately deliver it in a way where it doesn’t mean they agree with the decision that was made, but they at least may understand how the decision was made.

John: I see a lot of leaders in organizations. They just don’t explain well enough. They’re not fully transparent and people scratch their heads and they don’t understand. But when they learn the reason why a decision that was bad to them by their definition was made, then they can understand it. OK, if roles are reversed, I guess I would have made I see this all the time. I see this all the time. When a leader is transparent, it ultimately helps that organization move forward.

John: Here’s number four. Do what you say you will do, OK? Do what you say you will do. Ultimately, that is critical. I just talked about this in a prior episode. If you say you’re going to do something, do it. Say people are waiting. That’s going to break trust if you don’t. So if you’ve started to move the needle and earn their trust back, then commit to something. Hey, you know what? I’ll just, I’m just going to check back in with you on Friday just to see any more thoughts. The worst thing you could do is Friday comes and goes and you forget that’s the loudest message in the world again. Now, the Truslow, the needle moves backward. Now they do. They have more reason to not trust you. If you’re going to do that, which I think is a good idea, then make sure you follow up. Call them. That will go so far. That’s a deposit into the emotional bank account. Big time.

John: If you don’t know what to say, ask people questions. That’s the beauty. Some of the best leaders I know, they don’t say that much. They just ask questions and they listen. Some of the best leaders I know, it’s amazing. They don’t talk that much. They talk, but they’re not, they’re not talking most of the time they’re listening. Most of the time they’re just asking great questions. They’re throwing out ideas or gaining ideas from people. That’s great leadership. I love that. But communication is so key, we thrive on it as a human race. We thrive on communication and interaction that is so critical.

John: Number four, do what you say you’re going to. Do and put yourself to the test in the challenge, hey, you know what, I’m going to follow up with you on this day. Do it. OK, number five, show with actions that you care, not with what you say. Show, show, show, do things that tell people and convince them beyond a shadow of a doubt that you care about them. And number six, over communicate, I cannot emphasize that enough. Communicate until you’re ready to barf, whatever. Communicate, communicate, communicate until you have no voice left. OK, that is great leadership. All right.

John: So hopefully this helps. I hope you’re not in a situation where you’ve got I’ve taken over organizations where the trust level was at the bottom and had to rebuild it. These are things that I learned how to do through trial and error. Just thinking back, what were those components? These are those things. There’s more I know and I will add those in future episodes. But my goal is to keep these under ten minutes and it is eight minutes and change. So I’ll give you a little time back in your day. So again, as always, let me know what you think. Comments, suggestions, sharing like all that kind of good stuff. Go down below, give a five-star review. As always, I appreciate your listening. You’re watching and keeping in touch with the future episodes that are coming right after this. Thanks, everybody. Take care. Bye.

PrevPrevious173 – 5 Ways To Lose Followers
Next175 – The Confrontational Conflict AvoiderNext