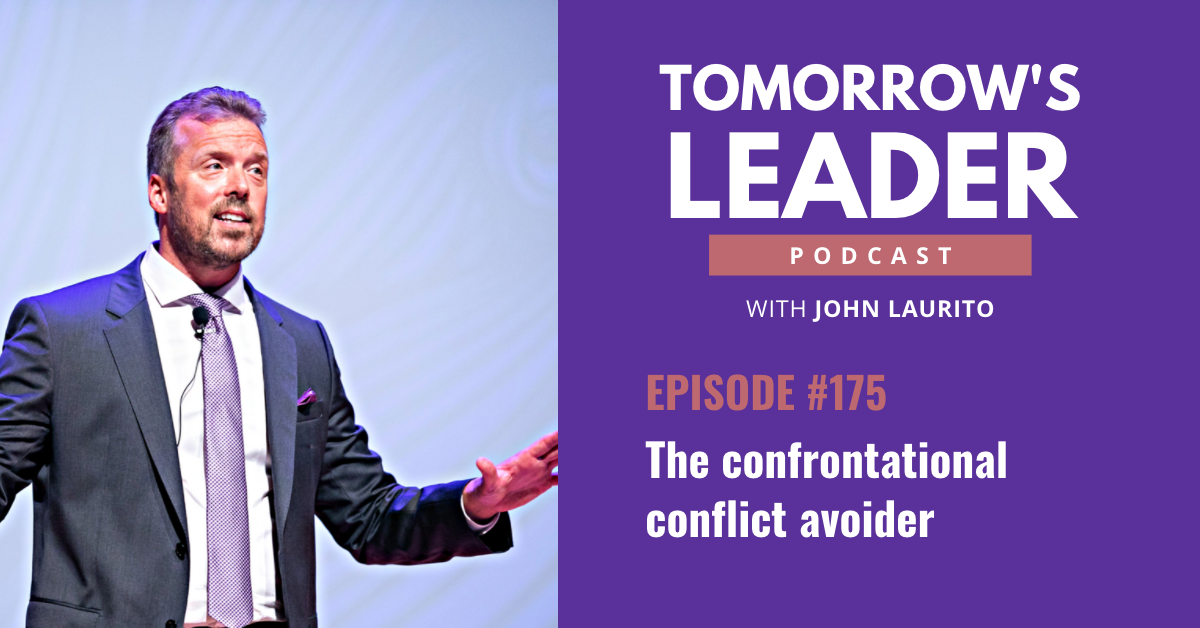 In this episode, host John Laurito shares another quick topic about how to be a great leader. Leaders have to be tough on their teams at times, but there’s a fine line between pushing people to be better and being a bully. Take a quick look around you and see if you know anyone who is a confrontation conflict avoider or if you think you are one, reach out to John, and he’ll help you out.

Get a copy of Tomorrow’s Leader on Amazon: https://tinyurl.com/huseae9h

[3:06] Tell your team that you do things out of love when calling them out

[6:29] Do you know anyone who is the confrontational conflict avoider

John: All right, welcome to today’s episode of Tomorrow’s Leader, where we dive deep on all things leader-related, related to leading yourself and leading others. I am John Laurito. Your host today and tomorrow. And as you’ll notice, if you’re watching YouTube, yes. This is the fourth episode wearing the same shirt. Because you know what today is? Today is podcast day. I’m filming five episodes. And some days, you know, I’ve done this and I’ve changed shirts of the days. Like today I haven’t. So suck it up. Deal with it. All right.

John: So I’m going to talk today about an interesting type of leader. And I have seen this. And it’s funny, I never put a name to it, but I had a good friend of mine. We were talking about a leader that we both know. And he was sharing with me because I had worked with him in a different capacity, this leader that we’re talking about. And he had worked under him for a period of time. And this leader was the type of leader that was a disruptor. He was somebody who would ruffle feathers. He was somebody who would put the pebble in your shoe. He was somebody that would thrive on making you uncomfortable and making his people uncomfortable. He was very good at creating discomfort. So he was a confrontational person, which is fine.

John: There are actually lots of very effective leaders that do that. And they do it for the purpose of truly helping performance. There’s a deep care and concern with people and want and that desire to help them develop. And to do that, sometimes you’ve got to push people into the discomfort zone. Fine. I get that. I buy that at 100%. And I’ve worked with

leaders and other leaders that have done that with me very effectively. But this leader was not good at developing people and dealing with conflict. So in other words, he was not good at tough conversations.

John: He was good at really making somebody uncomfortable and throwing out things that would create this kind of frenzied, you know, feeling of chaos and anxiety and constantly was very good to all of his people were always operating out of that kind of feeling that that veil of ah, that, you know, the overall feeling of anxiousness. But there was no real effort to develop the people. So he gave me an example. He’s like, you know, there was something that I was doing completely wrong. But instead of telling me, he just told other people. So he made it known that I was doing something wrong, but didn’t work with me to let me know and help me fix it.

John: That doesn’t make any sense. You’re not helping those people get better. All you’re doing is creating this negative energy. So on the contrary, if he was the type of leader that would roll up his sleeves and say, hey, listen, I know I give you a tough time, but I do it out of love. And I see you do things that are not contributing to your success. And I need you to understand how important this is. And I want to work with you to fix it so that you become the

type of person that I know you can be and the A-player that I know you are. If you had a message like that coupled with all that disruptive type of leadership, wow, that’s powerful.

John: So it’s one thing to be confrontational and kind of in people’s faces and direct and super candid. But if you’re just doing that and you’re firing these, you know, swords, these flaming arrows at people, that’s just creating certain energy, that’s not developing people. Now, if you do that and you show deep care and concern and willingness to help people, that’s the difference. You know, the other example, he gave me a situation. He said, you know, he made me have a conversation with somebody that he didn’t, he just simply didn’t want to have.

John: It was not my place to have this conversation with this individual. He just didn’t want to have it with the person and was delaying it so much and wouldn’t have it. It was some kind of tough conversation that he ultimately had when I kept bringing it up because it was somebody that affected him as well, he said he just put it on me. He said, well, you have the conversation. And it’s like, OK, that’s not leadership. That’s just somebody who just, you know, creates fear in other people. Right. That’s almost like a bully mentality. Right. Whereas if you have that disruptive leadership style now, there are some leaders that don’t have enough disruptiveness. They’re afraid to ruffle feathers. They’re afraid to get in people’s stuff and just create that discomfort.

John: You have to as a leader, you have to know when to do that and how to do that because that’s ultimately how you can push people. But you have to show them that you care about them. They have to feel like, OK, the reason that this person is being tough on me is that they care about me because they see me as a potential top performer or they see me as their best person and they want me to get. That’s great, you know, top people, top players, they want a tough coach, they want a tough leader, they want somebody who’s going to really push them not all the time, just pat on the back and say, wow, you’re doing you’re great, you’re fantastic. You know, I had a producer that was doing a certain level of business in his first year that was about 300,000 a business. Incredible. But his goal was to do 500,000 and he really had the ability to do it. He thought he did.

John: So for me to constantly say, wow, you’re amazing, a great, great, great job, that’s OK to a point. But to him, his standards were much higher. I’m not pushing him to his potential. I’m measuring him against everybody else and versus everybody else. He was doing great,

phenomenal, but he wasn’t doing well based on what he knew he could do. Now, maybe had I given him different leadership, he would be at 400,000, maybe 500,000. Maybe that’s what he needed. He needs somebody to just not be satisfied because he wasn’t satisfied. That’s knowing your people and really caring about them.

John: So, I thought I’d share that with you. A quick episode today just to think about the concept of the. And I want you to think about, do you know people like this, the confrontational conflict avoider, the confrontational conflict avoider. If you have not experienced this, look for it, you’ll see it. And if you can’t see it, guess what? You might be the one look in the mirror, OK? Hope hopefully or not. If you feel like you are, give me a buzz. I’ll help you out. I’ll be through it. So I hope this is beneficial. Again, another lesson in just how to be a better leader. That’s it. How to be a better leader of yourself and other people. It’s just about getting one percent better every single week. Don’t worry about

John: All right. So as always, like share, subscribe, give me comments. Go down below, give a five-star review and go on Amazon. Check out my book. Tomorrow’s leader conveniently named How the Best Leaders Get Better in a Fast-Changing World, available for instant download and also hardcover pre order for August delivery. Thanks for joining today and always and every day. And stay tuned for the next episode. Thanks, everybody. 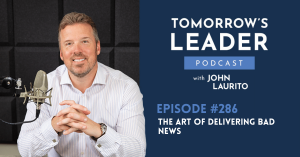 No matter what your role is, you’ve probably had to deliver some form of bad news before. Today host John Laurito talks about the importance 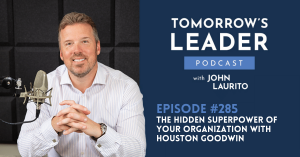 In this episode, host John Laurito is joined by the President and CEO of 97 Display, Houston Goodwin, as they talk about the power of 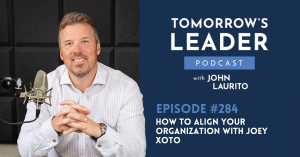 284 – How To Align Your Organization With Joey Xoto
John Laurito

Cultural alignment — aligning your organization’s culture, values, and goals with its people — is a vital part of the recipe for business success. Today